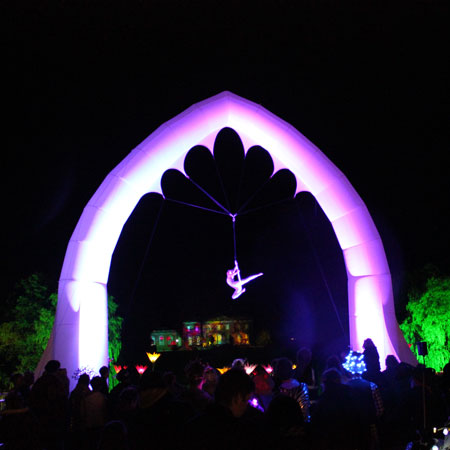 For a wow factor event able to perform in any level, outdoor space as well as in very large indoor spaces, book this breathtaking aerial show. The aerial performance takes place on an inflatable arch which stands at an impressive 12 metres tall and has a host of features to stun and amazing. The aerial act can interact with audience members as they safely walk underneath the arch.

But clients are also offered two amazing aerial acts that stand alone. The first is a high-energy, six-minute aerial performance watched in the round that is guaranteed to amaze. The second is a longer sculptural piece which shows the arch off to its full brilliance.

Utilising projections, aerial performance and the internal lighting built into the arch, this is a mesmerising and tantalising show that lasts fifteen minutes.

Almost unbelievably, this enormous structure can be transported with ease. The pressure of the air on the interior of the arch supports the aerial act and its base is self-supporting. If winds pick up, guy lines can be added to increase support.

Impressive selling points of this amazing aerial performance are its customisation options. Being made of pure white Stormex fabric, the arch can have branding and logos, as well as moving images, projected onto it. The colours of the internal lighting can be customised as can the costumes and colours of the aerialist.

Moreover, the show itself can be customised and made bespoke according to a client’s needs. This includes the choreography of the aerialist performer.

For acts and venues that desire an aerial act but do not want trussing or to erect inelegant structures, this is the perfect aerial show. Its beauty, portability and ability to be used outdoors make it a spellbinding aerial act that truly has the wow factor.

" Your performance was beautiful, it was the perfect finale to our show...a surreal moment in a surreal venue! "

" You were a wonderful company to work with and we look forward to having you back again soon. "

" The client was truly astounded and in awe of the spectacle. "

" This is one of the most beautiful and exotic acts on the market. I was proud to be able to include this within the show. "