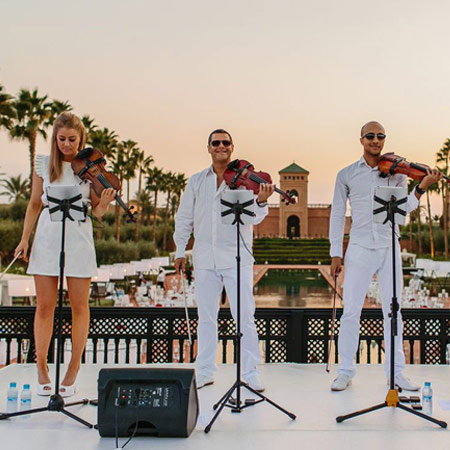 REASONS TO BOOK
A lusciously rich soundscape of chill out music for a myriad of events
Clubland chill-out music is taken to new heights with live strings
Beautiful, sophisticated and contemporary song list for a range of events
Performed at the opening of One Hyde Park in Knightsbridge
Based in London and available to perform at events worldwide
Chill Out Music, DJ with Musicians, String Quartets,String Trios and Solo Strings, Live Music and DJ

The Chill Out Set is a unique blend of live strings with a professionally produced soundtrack, with an option of adding saxophone and percussion, to create a lusciously rich soundscape of chill-out music.

The set creates a relaxed vibe for informal drinks receptions, or as unobtrusive background music for business networking events. Equally, the Chill Out set can gently build in tempo throughout the set if required, gradually encouraging conference delegates or wedding guests from their seats and onto the dance floor.

The ensemble’s Chill Out music has its roots in clubland chill out lounge music, taken to new heights by the use of a live string ensemble playing traditional classical instruments (or electric violins).

The result is beautiful, sophisticated and contemporary. The repertoire list for this set includes pieces by major artists we originally arranged strings for such as Nitin Sawhney, Nightmares on Wax, Robert Miles and Groove Armada.

Highlight performances of the Chill Out set include the launch of the film Nine at Claridges and the Opening of One Hyde Park in Knightsbridge.

" Thanks so much for a great event last night. You guys were absolutely perfect for the vibe we were trying to achieve, and we got so many compliments on the music throughout the night. You’re total pros, as your reputation suggested! "