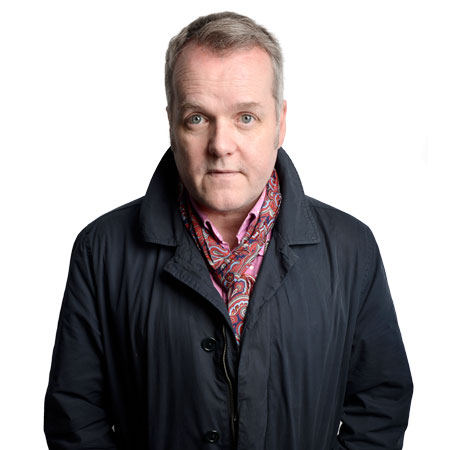 After ditching his career as a Human Resource manager for a future in comedy, he has not looked back. In 2016, he became the first ever stand-up comedian to perform a show in the Tower of London.

His experience as a comedian and as a former HR manager gives him abilities to entertain an audience as a presenter or as an award host at corporate events.

As a big sports fan, his presenting credits include BBC2’s Match of the day 2 and his voice can be heard regularly on Radio4. He was also part of BBC5 Live Coverage of the Cheltenham Festival, which won the Sony Gold Award. He has also won the Time Out Comedy Award, a Writers'

Guild Award (for his work with Dave Allen) and the one he is most proud of, the 2007 ProMax award for Best Interstitials for a series of Christmas promos on More4 featuring a very grumpy Santa.

He has written scripts for various TV Comedy shows including They Think It's All Over, Never Mind the Buzzcocks, 8 Out Of 10 Cats, Have I Got News For You, and A League Of Their Own. Other scriptwriter credentials include Strictly Come Dancing, The Graham Norton Show, BBC Sports Personality of the Year and Children in Need.

He has experience hosting award ceremonies, including at such events as The Croydon Business Excellence Awards, and is a popular choice for hosting corporate and sports awards and events, making the perfect choice for a range of events including after-dinner entertainment, awards host, stand-up comedian and more.

To book Kevin Day for your next event, contact our team.