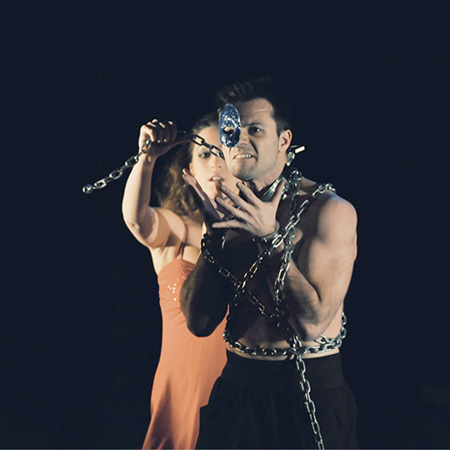 Book our death-defying escapologist and magic act for a Houdini act that will stun and amaze audiences anywhere in the world. This escape artist has travelled every corner of the world learning his art - as well as many others - and is a mentalist and close-magic artist as well as an escapologist.

Taking elements from his sell-out shows, he can construct elaborate and engrossing bespoke illusion acts or perform the original piece as it is designed to be. Either of these options are fantastic for large-scale event venues and high-profile engagements.

If you've a smaller audience or a more intimate venue, he can provide a mentalism show that will captivate your guests. This completely original show can be performed in three languages (English, Spanish or Italian) and will spook your audience with its mind-reading capabilities.

For a walkabout show, then look no further than his close-magic act, which has no time-limit and can be made larger by the addition of a projector. Perfect for small and large functions alike.

Having worked in many circuses as a main stage act, toured the world with his own show, performed on France Has Got Talent (La France A Un Incroyable Talent) and baffled audiences from Greece to China with his endurance, escape and mentalist show, our Houdini act is a seasoned showman. Mentalism and close-magic diversifies his already unique show, and he can offer each for your event.

His studies of escape and martial arts have taken him to China, where he was professionally competitive as a fighter, and all over Europe, bringing a range of perspectives and cultures to his craft. His show can be solo as well as with an assistant, and his stunts get increasingly daring.

His magic acts are daring and ingenious, incorporating dangers such as fire, drops from great heights, underwater submersion and more. Your audience will be holding their breath as he unlocks the padlocks on a straight jacket while submerged in water or gasp as the ropes burn through on the rope he is hanging from. This is an act that will keep audiences on their edges of their seats and create an electric atmosphere in any venue.

He is the perfect act for grand-scale after dinner entertainment at a corporate event or as a stage show for theatres, festivals and more. Our Houdini act's quality means that exclusive bookings will have an extra edge of impressiveness, and he can tailor his show to suit different performance spaces.