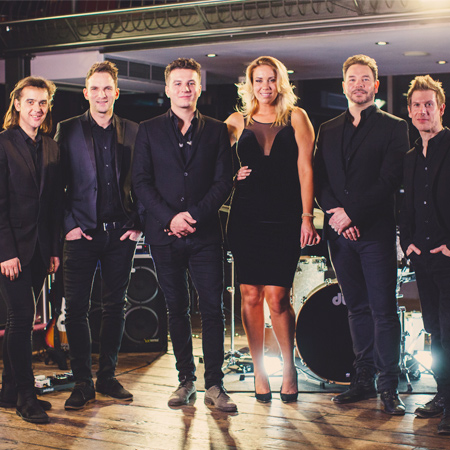 REASONS TO BOOK
Premier function band for extremely high calibre live music entertainment
Huge repertoire of songs can be tailored into a performance of your choice
Exceptional choice for weddings, corporate functions and top end events
Have performed at Formula 1 Grand Prix in Bahrain, ITV Awards and Rugby League at the Millennium Stadium
Based in London and available for events all over the world
Live Music and DJ, Cover Bands, Covers Singers and Duos

This exceptional, high-end function band provides extremely high calibre live music performances that brings a touch of class to any event. The six-piece party band is made up of some of the very finest musicians with both male and female vocals for the ultimate performance covering a wide range of styles with incredibly well played cover songs.

Our brilliant high-end function band have specifically built-up a vast repertoire of songs which they can tailor to event types or clients preferences. The cover songs in their repertoire spans throughout the decades and ranges from modern pop to 1970s funk and soul. The party band can play everyone’s favourite hits and they will be sure to get your guests up on their feet dancing the night away.

The London based function band have made a name for themselves as one of the very best party bands on the market. They have worked with event organisers for some of the largest events and functions including Formula 1 Grand Prix in Bahrain, Carlsberg Festival in Switzerland, Tigi Awards, the ITV Awards and The Rugby League Weekend at the Millennium Stadium in Cardiff as well as various other notable occasions.

Our high-end function band is perfect for providing the very best covers songs and top of the range live music entertainment at very high profile events all over the world. They are also an exceptionally high quality act for weddings, corporate parties, charity events, graduation balls and many other occasions.

Get in touch with our Entertainment Experts if you would like to book the party band for your next event.

" What can I say guys. You did it again. The team love working with you. We are going to have to have more events to get you back "

" I haven't seen that many people 'po-go-ing' for about 20 years! absolutely ROCKING - everyone really enjoyed you guys, and said you were the best band they had heard. You made our wedding night complete and perfect. "

" I watched you all at the St. George's Gig you did for the Army on Friday, and OH my god, you were grrreat. The songs chosen were superb and I couldn't stop singing to every song, and after a few drinks I even jumped in heels and a skirt, lol. If I'd of known you were going to do such jumping and well performed tunes I'd of brought my converses to hit the ceiling properly. Thanks for a surprisingly (as they usually play 70s and 80s Disco at these do's) great night! If I need a band for a party I know who to contact! "