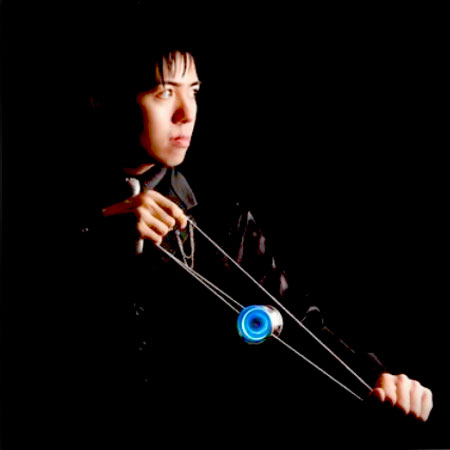 This sensational, one of a kind Japanese Yo-Yo Champion will completely stun your guests. Taking yo-yo performances to the next level, he incorporates elements of dance, acrobatics, magic, and martial arts as well as offering a superb show with stunning visuals on a huge LED screen.

Our Japanese Yo-Yo Champion has created an innovative wow factor form of entertainment, taking the yo-yo far beyond the limits of a toy that everyone played with as a child, and is guaranteed to bring a high level of excitement to your event. His incredible shows are a fusion of contemporary styles with his Japanese heritage, pushing the boundaries of traditional yo-yo artistry. His skills are honestly mind-blowing.

The Japanese yo-yo performer has a variety of acts available including:

This Japanese yo-yo performer began crafting his skills as a very young age and decided to commit himself to seeing how far he could push yo-yo artistry. He has won the title of World yo-yo champion twice, become the first ever yo-yo performer to join the world’s most prestigious circus establishment, gave a talks at the original TED conference as well as TED x Japan and received a standing ovation and has appeared on multiple TV shows as well as performing for many private and corporate clients such as Harley Davidson, Canon, Charles Schwab and Zappos.com

To book this innovative Japanese Yo-Yo Champion for your event, please contact us at Scarlett Entertainment.

" His performance is not just a show but does have a story. Even his world's best Yo-Yo technique is just a tool to explain that. He expressed the theme of our event "connection" perfectly through his performance. That means the communication between us and suppliers had pushed up to the next level. We do recommend him for many types of occasions not only as an entertainer but also as a storyteller. "

" He is not just an extraordinarily talented performer but also has an inspiring personal story. His appearance at TED2013 won a standing ovation, and created a big hit online. "