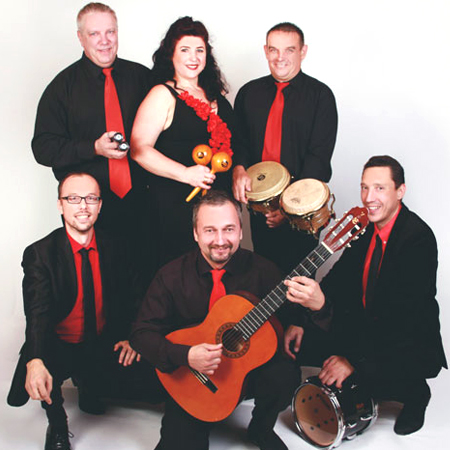 REASONS TO BOOK
A live party band that can perform the best Latin pop songs and famous Latino classics at your event
Fully live show that combines classic Latin sounds with pop, rock and jazz elements
Wide repertoire includes famous hits by Ricky Martin, Celia Cruz and Gloria Estefan
Have performed for weddings, festivals and street celebrations all over Europe
Based in Hungary and available for performances worldwide
Live Music and DJ, Cover Bands, Latin and Salsa Music, World and Cultural Acts, Latin and Salsa

Looking to entertain guests at your event with some Latin pop songs and famous Latino classics? Then look no further! Our Latin Music Band can offer the cover live show you’ve been looking for. This live party band’s cover songs performance moves away from the tendency to play only classics or only modern songs by combining the best of both styles!

Leaded by a female vocalist, this six-piece band is the ideal entertainment option for weddings, festivals and street celebrations, this live party band will add the Latin flavour you’re looking to provide your event with. Those who enjoy cha-cha, cumbia, samba, bolero, rumba, merengue and bachata won’t be disappointed and will have no option but to get up from their seats and get in the groove!

Our Latin Music Band’s will mix the sound of famous Latino classics with pop, rock and jazz elements. This ensures their cover songs performance’s uniqueness and originality. They will also play worldwide known Latin pop songs such as ‘La bomba’ by Ricky Martin or ‘Suavemente’ by Elvis Crespo.

Their wide repertoire of songs also includes the best of world-famous singers like Gloria Estefan, Celia Cruz and Carlos Santana. Do you have any special requests? Our live party band can and will add the songs you’d like them to play on their set list exclusively for your event.

Audiences at events all around Europe have already had the opportunity to dance to this cover live show’s songs. Some of the most famous venues where our live party band has already played Latin pop songs and famous Latino classics include the Sheraton Hotel Fuerteventura in Spain, the Sopron City Council in Hungary and A-Rosa Kitzbühel resort in Austria.

Bring the rhythm and good vibes of Latin music to your upcoming event with this Latin Music Band.

Contact us today and make your enquiry. Scarlett Entertainment coordinators will be happy to discuss further details on this act with you.