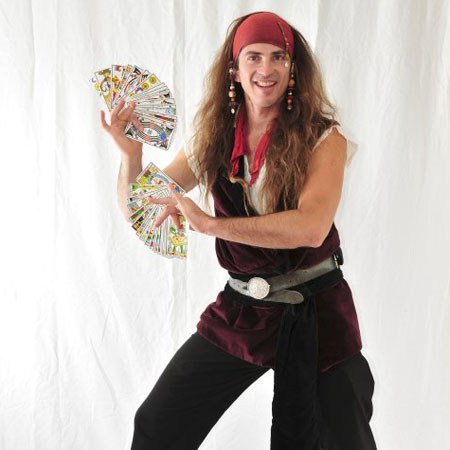 REASONS TO BOOK
A magician and a juggling artist with over 15 years experience
Awarded Magician of the year 2010 in Israel
Can perform amongst guests (mix and mingle) or a complete stage show
Stage Show is inspired by the character Jack Sparrow
Based in Nice & available to perform at events throughout France
Magic and Illusion, Magic Stage Show, Themed Entertainment, Pirates, Family Entertainment, Magician for Children

Sylvain is a magician and a juggling artist with 15 years experience of performing all around the world. Based in Nice, Magician Sylvain can perform amongst guests (mix and mingle), table to table or a complete stage show depending on the venue and event type.

In the last few years Sylvain has created a stage character, inspired by the captivating character of Jack Sparrow from "Pirates of the Caribbean", and created his own show, based on a unique artistic cabaret number combining juggling and magic.

Awarded Magician of the year 2010 in Israel, Sylvain can perform in the 4 languages he speaks: English, French, Spanish and Hebrew.  This top class international magician is in huge demand with corporate events and birthday parties, to weddings and gala dinners.

Sylvain's stage show & Manipulation act
Sylvain's stage character was inspired by the magnificent & charming character of Jack Sparrow from "The Pirates of the Caribbean".  An Impressive and colourful character, unique and hypnotizing magic effects, original music, intelligent humour that touches every person in the audience – all these brings the show to an experience that is far beyond a magic show.  It is a journey to the legendary and fantastic world of the imagination.

The show is a family show, interesting to all ages and to each (and every) participant.  The show can be adjusted to each event and stage (from a private living room to the top professional stage).  The show includes objects levitating, juggling with 8 crystal balls and the active participation of an audience of all ages.