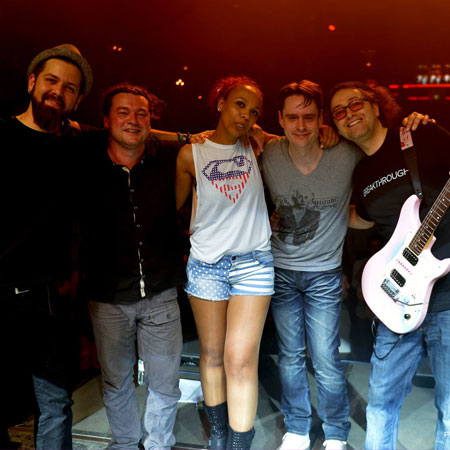 REASONS TO BOOK
Specialising in ‘pure rock’ and led by a sassy female vocalist, this high impact cover band specialises in frenetic live sets
Performing tracks by the likes of Pink, ZZtop, Lenny Kravitz and Rage Against the Machine our live band create a stadium-filling sound at all events
Two amazing guitarists, an expert bassist, and a crazy drummer, with a feisty vocalist, our event band bring irrepressible passion to every show
They have provided entertainment for prestigious clients like In vino Veritas Waterloo, Le château de Genval and Les brunchs Jazz de Lasnes
Book Rock Cover Party Band for events in Belgium and worldwide
Live Music and DJ, Cover Bands

Live music is the ultimate way to bring your party or wedding reception to life. Relaxing guests and getting people in the mood to enjoy themselves, what music to go for is an extremely important decision. Whilst pop covers are all very nice, sometimes you want something with a little more substance: that is where Rock Cover Party Band step in.

Disguised as a traditional cover band, these artists will create the sounds of a spectacular rock show at your special occasion. Far more than your typical event band, our live band specialise in electric covers of the greatest rock artists in history. The perfect corporate or wedding entertainment for clients looking for a unique, crowd pleasing soundtrack to their special occasion, expect guests up on the dance floor from the moment this group step onto the stage.

Led by a sassy female singer, this rock cover band is a breath of fresh air from the mainstream event bands that clog the entertainment industry. Performing a vibrant repertoire of the world’s best rock songs from the 1950s to today, our band features tracks by the likes of ZZTop, Lenny Kravitz, Rage Against the Machine, Nirvana and The Cranberries in their irresistible set lists.

They are also able to tailor their shows to your particular musical preference or event type, our live band can focus on a specific era or group if required.

Having collaborated with some huge rock names including Blues guitarist Joe Bonamassa, Portuguese singer Nuno Resende and Grammy Award winner JJ Goldman, our rock covers group are a force to be reckoned with on the entertainment scene. Regularly performing at amazing festivals, wedding receptions and corporate events, our artists have wowed audiences all over France and internationally.