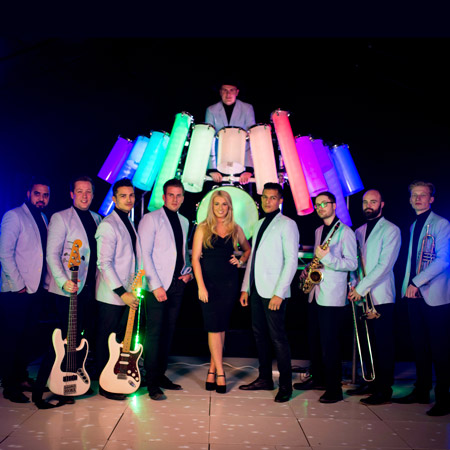 Our fantastic LED Drums Party Band are one of the only high calibre groups in the world to feature a unique custom-made LED drum kit. They have stepped up the visual aspect of the live party band and introduced a captivating feature that fascinates audiences all over the world. Already one of the most stylish bands on the scene, the London based collective will become a memorable feature of your event thanks to the mesmerising LED drummer and the high quality live music.

The LED lights of the drum kit are interchangeable as well as customisable and they add a visual dynamic you don’t see with regular function bands. The LED drummer uses state of the art technology to sample any sound and transpose that to the drums. This allows the LED Drums Party Band to perform unlike any other with a live sound that is as close to the original as possible.

The live party band with LED drummer plays all the world’s greatest hits, including some very impressive medleys. They cater for all tastes and will always tailor their set list to client requirements. Alternatively, let them do their thing and you can expect to hear a mix of Lionel Ritchie, Vanilla Ice, Aretha Franklin, Avicii, The Killers, Rihanna and many more.

Book the live party band as a standard seven piece or upgrade right up to a thirteen piece with a horn section and added vocalists. The highly talented musicians have played with the likes of Adele, Michael Buble, Olly Murs, Jennifer Lopez and Sam Smith plus many more household names so you can be sure the standard of musicianship is second to none.

Top Tip:
Not interested in the LED drummer? Book the London Live Event Band instead.

If you would like to book the LED Drums Party Band, please get in touch with our team at Scarlett Entertainment.

" Our client was extremely impressed with you guys. Once we talk to them later in the year I have a feeling he may want you back but possibly dressed as something different again. "

" We were not sure how it all worked when watching the videos but neither of us expected it to be quite so incredible, I’m sorry I don’t recall the drummers name but he was insane!! "

" Guys what can we say other than you made the event something far more special than any previous year. The client has been raving and singing your praises since Friday. "