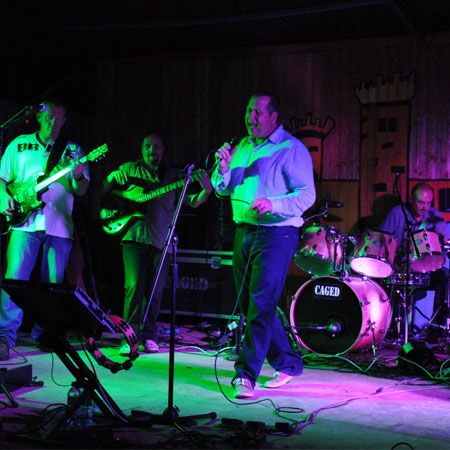 REASONS TO BOOK
5 piece rock/ Rhythm & Blues band performing 100% live covers
One of the most booked and popular bands in the Dordogne
Repertoire includes golden Oldies to popular contemporary artists
Available for Weddings, parties and any special occasions
Based in the Dordogne & available to perform throughout South France
Live Music and DJ, Cover Bands

This Rock Covers act are the perfect choice if you are looking for a wedding band in the Dordogne, Aquitaine – or anywhere in the South of France.

With a fantastic set list of dance-floor-filling tracks from the 60s to today, this group are an all-live wedding band that everyone will love. Recent testimonials call the band “phenomenal”, “amazing”, “fantastic”, “amazing” and “excellent from start to finish”. When the band starts to play, no one wants the party to stop and encores of one hour or more are commonplace.

If you are not getting married this year, don’t worry – you can book the group for anniversaries, private parties, engagements, births, pubs and clubs, or even at home. Wherever you want excellent live music from a band with a great set list that packs the dance floor all night long.

" Just wanted to say thanks for the great performance at our wedding just over a month ago. Thanks for letting us join in with the singing too. All of our guests loved you guys and said what a great set you played, the Stones, Beatles and loved your new cover of Coldplay’s Clocks. We would definitely recommend you to our friends and family if they ever need a band. Take care guys. "

" My wife and I would like to say thanks very much to all the members of southwest for a spectacular performance at our wedding reception. The choice of songs was excellent and musicianship and technical aspects of the show were phenomenal. A lot of my friends are musicians and generally quite hard to please but it’s fair to say we were all blown away by the quality of the show. The key thing that made the evening a success though was that this is a band who know how to get a party going and get everyone up on the dance floor and having a great time – we wished it would never end! Thank you very much from a group of very satisfied customers "

" We had an amazing time on our wedding with [the band]! The music was great and everybody was dancing and signing along! The guys are all really friendly and all the communication before the wedding went really great by email! Thank you so much [the band], for making a wonderful party at our wedding! "

" We were delighted with the band at our wedding. The music was fantastic and we had guests that didn’t stop dancing through the entire set! All guests commented on how great the band was. The guys were very friendly and so helpful beforehand. It was a perfect ending to a perfect day. Thanks once again for everything! "

" What a marvellous evening you gave us, your choice of music was terrific, everyone enjoyed it, and eventually joined in, though you were a much better singer than we were!! The guitar playing while we ate was especially commented on – friends suggested that the whole scene was reminiscent of “The Great Gatsby”! I have already passed your name on to one person who asked me who we had at the party. Thank you once again for making the party go so well. "