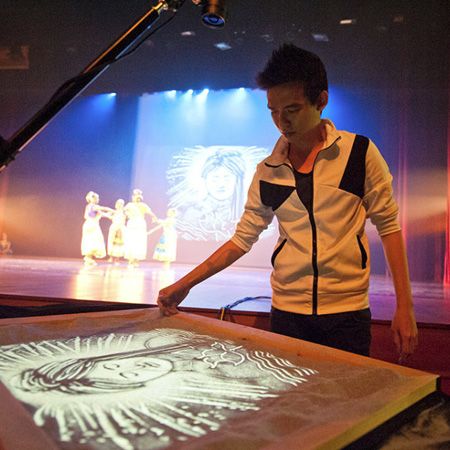 Sand Artist Lawrence is a multi-disciplinary artist that excels in a number of fields. He is an accomplished visual and performing artist that has performed in over 200 shows internationally. The toast of Singapore, Sand Artist Lawrence has been a major fixture in the country's art events. His many artistic specialties include: Vocal and stage performance, theatre performance, acting for TV, movies and advertisements, and of course - Sand Animation Art.

With Sand as the medium, Lawrence creates imaginative and creative artwork that are surreal and awe-inspiring. He uses his skills as a visual artist to weave in the sand the stories that are dear to his heart. Coupled with music and light, Sand Artist Lawrence can take his audience on a journey of imagination. It is simply amazing that his creations evolve before his audiences' very eyes. In as little as a couple of minutes, Lawrence is able to create intricate designs, faces of important historical figures, and whatever else he can imagine.

It is no surprise then that Sand Artist Lawrence is a celebrated artist in his country, with performances graced by top entertainers and politicians alike. He performs regularly at international corporate launches, award ceremonies, television shows, commercials and documentaries. He has received numerous art awards and has been featured in a number of write-ups and documentaries.

Sand Artist Lawrence's talent is indeed awe-inspiring. Mediacorp, Daikin Japan, OCBC, Shell, The Monetary Authority of Singapore, as well as his many other clients can attest to the creativity and genius of this Singaporean Sand Artist.

Enquire about this talented sand artist by getting in touch with us today. Our dedicated team of Entertainment Experts will be more than happy to answer all the questions you may have about this live event artist and assist you in the booking process.