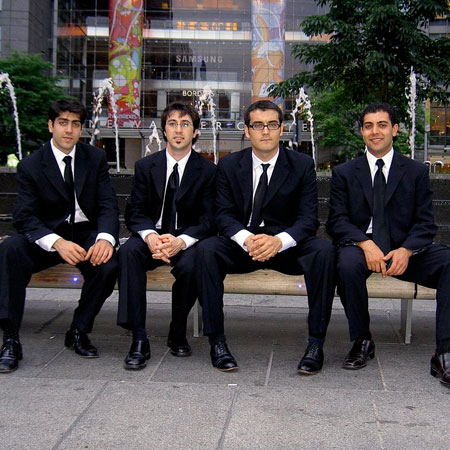 REASONS TO BOOK
Fantastic Jazz Band that also offer Motown, Latin, Soul, R & B & Rock
Available as instrumental only Jazz or with a vocalist or full dance band
Corporate clients inc NBC-Universal, IBM, Estee Lauder, Veranda Magazine
Professional musicians that have been performing together for over ten years
Based in NY and available to perform Worldwide
Live Music and DJ, Cover Bands, Jazz,Swing,Blues and Jive

They are a New York-based band that has been providing listeners with great music, fresh talent, and vibrant performances for over seven years.  With extensive experience performing for weddings, corporate events and private parties, they are committed to helping clients make their event precede elegantly and effortlessly.  The band is available to perform internationally.

They are an extremely versatile band. They are available in many different formats, including trio and quartet. Their repertoire includes Jazz Standards, Latin and Brazilian favourites, as well as Motown, Blues, Smooth Jazz, Soul, R&B and Rock tunes.

" They are great. We hired them for a dinner/dance at the Waldorf and they were able to tone it down during the dinner and liven it up later on for dancing. They sound fantastic with or without a vocalist. "

" They were wonderful! They were more than willing to work with us to make sure we had the right playlist. They were so versatile! They offered to play different types of music from jazz to motown to salsa. They stayed late when the party was still hopping and everyone commented on how much they enjoyed the music. I hope that I have the opportunity to hire them again! Thank you so much for making the Hardesty & Hanover 120th Anniversary Party a great success! "

" Outstanding!!! These are great guys that can play fantastic music. If the rating scale went to "10" they are a "10" in every respect. We're planning our next affair, and the they are already on the list! "

" Look no further ... these guys offer the perfect experience and all for the right price ... we had them perform several requests (more than most are willing to do) and they even sprinkled in some of our own hand-picked I-Pod tunes during breaks ... the ceremony stuff was tasteful classical music, cocktail hour was loungy / eclectic jazz, and dance hour was a soulful funk/ groove mix ... these guys will play whatever you want ... They are young energetic versatile crowd-pleasing gentlemen that play great music, and they are a real pleasure to work with. "