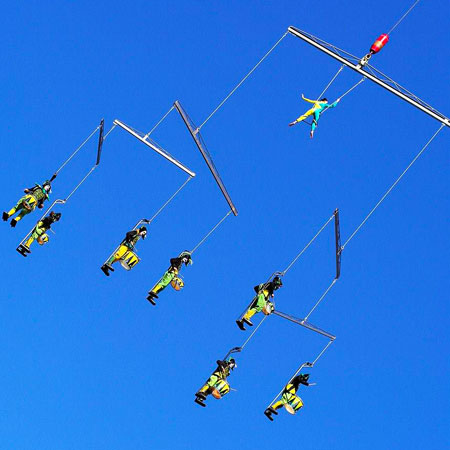 This stunning aerial spectacle features our Comedy Roaming Drummers from France. The sky-high performance orientates around a magnificent aerial prop with a gang of seven drummers hanging like a giant version of a baby’s mobile over a crib. The show is like a visual representation of a child’s imagination with fantastical characters and live music.

Aerial Drummers France deliver and extravagant, grand-scale spectacle that captivates all types of audiences anywhere in the world. The 45 minute show is a brilliant way to offer your guests a really immersive experience with exciting characters, live music and a brilliant aerial spectacle.

The aerial drummer’s show begins with a roaming drumming parade that makes it's way through the crowd to the centre stage of the stage whilst fooling around with members of the audience. The second part of the show involves the being raised up high above the crowds on their amazing aerial prop. They perform a cacophony of harmonised rhythms whilst an aerialist perform amazing stunts right in the middle.

Created back in France, near Lyon, in 1990, this amazing aerial spectacle has travelled all over the world and bee seen in Bankok, Vancouver, Las Vegas, Athens, Moscow, Blackpool and many other exotic locations.

The show featuring Aerial Drummers France aims to combine the audience, the surroundings and even the architecture as the show transports the spectators attention from the ground to the skies.

To book this unforgettable drumming spectacle for your event, contact our Entertainment Coordinators who will be more than happy to help