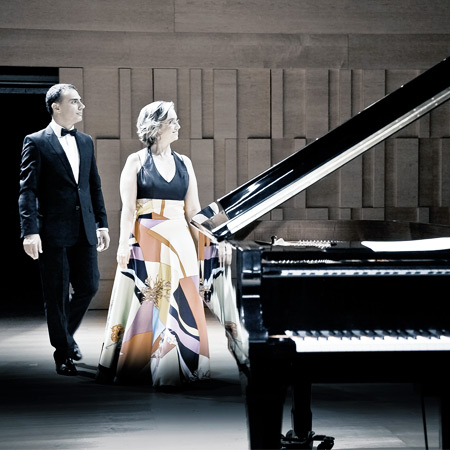 REASONS TO BOOK
One of Europe’s most renowned and acclaimed piano duos
They have an extraordinary capacity to move an audience to tears
Possess a diverse range of orchestral colours and deep harmonic awareness
Have a repertoire that ranges from Bach to 21st century compositions
Based in Barcelona, Spain and available to perform at events worldwide
Live Music and DJ, Pianists

This International Piano Duo are a paragon of artistic talent in the world of classical music and one of Europe’s most renowned piano duos.

Acclaimed by both the public and critics alike as two musicians with an extraordinary capacity to move an audience to tears, the duo also exhibits a spectacular synchronisation and a very rare mutual understanding. Pianists Carles and Sofia have gained critical acclaim for their brilliant technique, passion, unparalleled quality of sound and infinite elegance.

With a profound knowledge of all classical music genres, Carles and Sofia have developed a unique style in the interpretation of classical repertoire. The duo possesses a diverse range of orchestral colours, a very natural phrasing and an impressive singing tone, together with a deep sense of harmonic consciousness.

Since 1987 when they began playing together, Carles and Sofia’s international career has led them to appear in famous venues like Carnegie Hall (New York), Kolarac Memorial Hall (Belgrade) and Teatro Solís (Montevideo).

Their repertoire ranges from Bach to 21st century and includes all major works for piano, together with the most brilliant and demanding orchestral transcriptions. They also have developed a very close relationship with many contemporary composers, like John Carmichael or Daniel Basomba, who, after listening to the duo, created works especially for them.