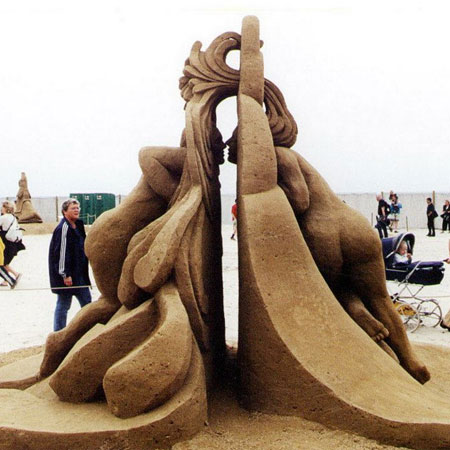 Sand Sculpture Daniel is from the festive City of Dublin in Ireland. Having studied sculpture in the Dublin Institute of Technology's College of Marketing & Design, Daniel has spent the last ten years working on many different projects in Ireland and abroad - here are a select few.

- 2005 Video composition to accompany performance of ‘Boil’ at the Estonian music days festival.
- 2004 Co-Produced, directed and edited ‘Cool Carvings’ ice carving documentary
- 1996~2002 Building props and sets for many Music promos and advertisements
- 1996~2002 sculpture assistant to the Irish artist Patrick O’ Reilly providing technical support and fabrication of many of his sculptures.
- 2001 Lead sculptor of the Burren Interpretive centre, Kilfinora County clare.
- 1996~2000 Decorative painter of countless bars night clubs and restaurants in Ireland and abroad with the Company ‘Paint works’

Since leaving college Daniel has won many awards & accolades for his Sand sculptures and has worked at events all over the world.