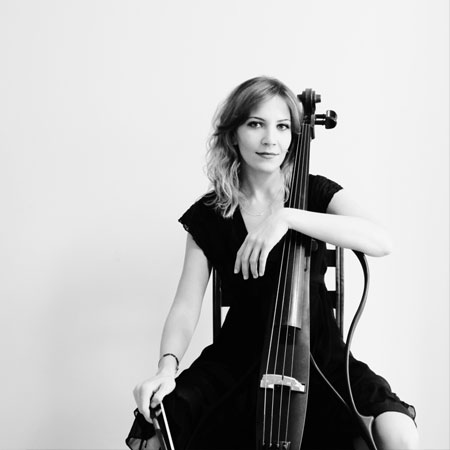 Having started off her career as a cellist for a renewed London based electric string quartet, our cello player has a wealth of international performance experience. She has performed in some of the world’s most prestigious venues such as the Dubai Armani Hotel, Louvre in Paris, Aberdeen Art Gallery and Kuwait Harvey Nichols.

Now a sought after electric cello player and session cellist she has performed with the likes of Brian May, Muse, Olly Murs, Professor Green, Michael Bublé, Gary Barlow and Rod Stewart. She has also made numerous UK TV appearances on shows such as The X-Factor, Strictly Come Dancing, Keith Lemon’s Lemonade and even performed at the Royal Variety Show in 2013.

Performing from a repertoire that encompasses pop and rock hits, classical songs and world music, as well as original compositions, she is able to cater to all types of events and musical tastes. Her incredible electric cello show is a high-impact electric strings performance that will hold listeners captive. The mesmerising sounds of the cello are haunting and beautiful. Alternatively, our cello player can offer a background music performance during a dinner or drinks reception with an enchanting soundtrack that guests can relax to.

Each of different styles of performance can be tailor to suit your entertainment needs. Her stage show as a solo cellist normally lasts 20 minutes with 4 or 5 tracks performance, however this can be shortened or lengthened and showcase a repertoire chosen by the client on request. Her background music sets usually include 4 x 45minute sets of well-known classics and pop hits to create a stylish ambiance - again this can be tailor to suit clients’ needs.

A highly talented and experience solo cellist oozing elegance and sophistication, she will be an asset to any event. Get in contact with our entertainment coordinators to book our amazing cellist for your event!