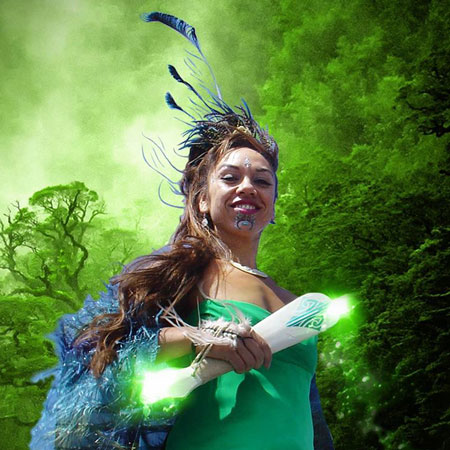 Channelling the spirit of her ancestral heritage, Toni Huata, a famous Mãori singer delivers an incredible fusion of traditional and contemporary Mãori and world music. Skilfully keep old traditions alive, the Mãori singer’s live music blurs the lines between multiple genres and creates an exhilarating experience for the viewers.

Described as an asset and ambassador of Mãori Language, Toni Huata champions her heritage, expressing it through live music as well as culture, language and movement workshops, a motivational speaker and themed events. The female singer is an exceptional booking for cultural events, city festivals, themed parties, gala dinners, expos and corporate events.

Toni Huata live music reflects an eclectic influence that ranges between jazz, soul, RnB, electronica, dub, opera and Haka. Available as a solo artist or with musicians and dancers, according to client preferences, the New Zealand Female Mãori Singer can create a cultural rich performance that showcases her exceptional live musician a bid to celebrate Mãori culture or educate international guests. The brilliant Mãori singer also has a visually striking stage appearance with a range of costumes and outfits that could be tailored to the event.

She has released several albums, each receiving praises from multiple international sources and performed all over the world. The Mãori singer has been seen in the UK, Spain, Holland, Germany, Canada, China, Hungary, Austria, Japan, Phillippines, America, Samoa, Hawaii, Rarotonga, Solomon Islands, Australia and Tahiti. In addition to live music performances, he voice has featured in Peter Jackson’s King Kong, the Fan Fare music for all 48 Rugby World Cup 2011 games and the opening ceremony music.

If you are looking to entertain with a celebration of Mãori culture and music, then this incredible New Zealand based Female Mãori Singer is the perfect choice. Speak to our team at Scarlett Entertainment to find out more.