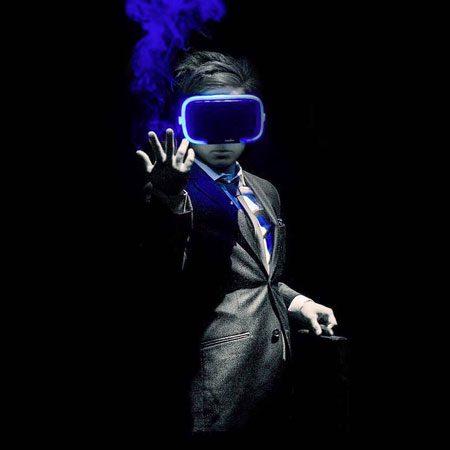 REASONS TO BOOK
Our award-winning illusionist uses the latest technology for his innovative live stage VR show
His state of the art visual mapping show immerses spectators into the world of virtual reality
A popular TV illusionist, he received an audience standing ovation on 'America’s Got Talent'
A stunning act for technology conventions, logo reveals and brand activations and much more, his show is sure to make your event memorable
Our international tech illusionist is based in Japan and available for events all over the World
Unique Brand Reveal Acts, Video Mapping,Screens and Projection, Illusionist, Digital Magician, Magic and Illusion, Digital Animation, Latest Technology Acts, Speciality and Novelty Acts, Futuristic, Unique Acts, Digital Magic, Themed Entertainment, Hologram and Augmented Reality, Augmented Reality, Brand Reveal Entertainment, Interactive Entertainment

The state of the art VR Illusion Show is the latest innovative video mapping show from our multi-award winning magician and illusionist. He uses the latest technology for this one of a kind stage show that immerses the spectators into the magical virtual reality world. This is virtual reality entertainment on a whole new level.

For this amazing VR illusion show, he uses the latest in technology to impress and immerse the audience in the world of virtual reality. Equipped with a virtual reality headset, our technological illusionist uses extremely clever video mapping techniques and clever illusions to create a show that is unique in the field of live stage magic. The VR illusion show blurs the lines between reality and graphics making the possibilities of this virtual reality entertainment utterly endless.

A contemporary magician, innovative video mapping expert and a very reputable character in the world magic scene, his mind-blowing visions create magnificent spectacles that have been wowing audiences all over the world. The highly acclaimed magician featured on  'America’s Got Talent' where he received a standing ovation for his incredible video mapping show and was described as 'amazing' by Simon Cowell. His performance translates effectively to screen and he has gained an international following for his appearances on the BBC show 'The Magicians' and countless other TV shows across the world.

The VR Illusion Show is a wow factor performance that suits any type of event looking to create a lasting visual impression. Being a true state of the art virtual reality entertainment spectacle makes this show highly suited to technology and gaming conventions, product launches and promotional events. The show is customisable and can even include logos in the sequence for promotions or brand reveals. Our team will work closely with you to ensure that the performance that you book meets all of your objectives and outcomes.

Contact our team at Scarlett Entertainment to find out more or to book this amazing VR Illusion Show for your event.