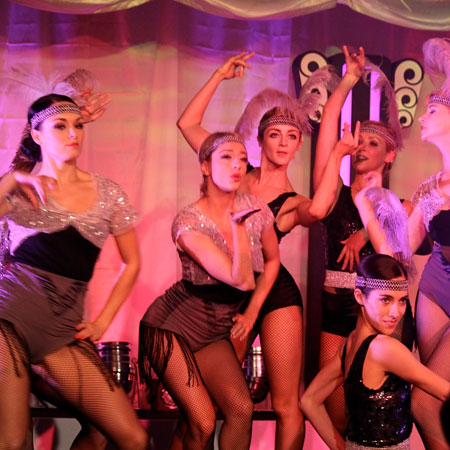 Experts in entertainment, this dance group delights in bringing high-quality dance and theatre shows to audiences in London, the UK and internationally.  Combining flair and a fresh vision with classical training, they span all styles of dance, from ballet to commercial jazz, contemporary to installation, ribbon dances to tap.

Specialising in historical routines including Baroque, Regency, and the 1920s to the 80s, their classical dancers can perform excerpts of ballets, neoclassical spectaculars or contemporary choreographies. They choreograph bespoke routines and designs with an emphasis on unique costumes and the creation of a carefully constructed theatrical atmosphere that encompasses music, lighting and installation.

They have created shows for fashion clients Louis Vuitton, Uniqlo, Topshop and Triumph. Performances have ranged from the boutique – at some of London’s most exclusive private events such as The Prince of Brunei’s birthday party and Mr & Mrs Wong’s Chinese New Year Party – to the spectacular, with an audience of thousands at The Brit Awards and the O2 Arena for Elton John.  The group have toured Germany, Japan and Egypt, as well as New York and Barcelona; and danced in Kensington Palace, the ICA, Tate Modern, the V&A, the British Film Institute and the Royal Opera House. They have performed stunning sections of Swan Lake with a 50-piece orchestra at the Palace of Whitehall, and trod the boards of the West End in a summer run of Burlesque with Immodesty Blaze.

To a wider audience, they appeared on CNN, taught Beth Ditto, Justin and Alan to dance on The Friday Night Project, appeared in seasons three, five and seven of The Apprentice, working with contestants to choreograph shows to enhance their final presentations, and graced the stage in the BBC drama Marie Lloyd.