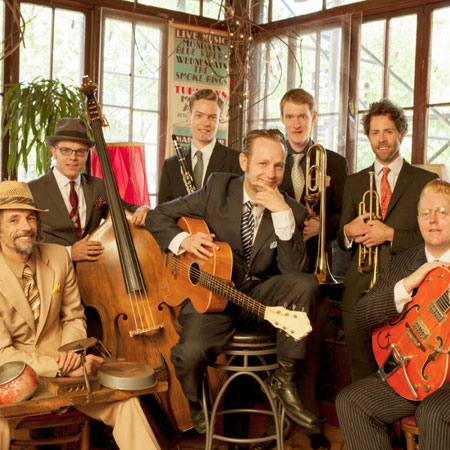 For those seeking fresh and exciting live entertainment for their event, look no further than one of the most acclaimed bands in New York City! The band’s repertoire is a fabulous collection of high energy jazz and swing from the 1920′s & 30′s, cool classic blues and R&B, New Orleans & Dixieland plus a little bit of vintage country and western swing when called for.  Their music is a perfect addition to a variety of social events including cocktail parties, wedding receptions, dinner parties, corporate events, fund raisers and swing dances.

The 1920s Brooklyn Jazz Band range in size from a quartet of vocals/guitar, upright bass, trumpet or saxophone/clarinet, and washboard percussion, to as large as a septet or octet which adds more horns including saxophones and trombone, lead electric guitar and/or piano.

" Although they’ve been winning awards left and right and receiving accolades from music legends like Willie Nelson since 2007, the 1920s Brooklyn Jazz Band have the kind of stuff that stardom is defined by. The group’s percolating soup of swing, New Orleans jazz, vintage jazz, and country is not only timeless but actually revolutionary in a sense; to a younger generation this will be seen as new, freshly scrubbed. "

" There are old souls in the young bodies of the 1920s Brooklyn Jazz Band. They play the best kind of roots music, one that explores the various sounds that turned on the youth in pre-and-post WWII America. Unifying it all is the band’s dazzling jazz chops. "