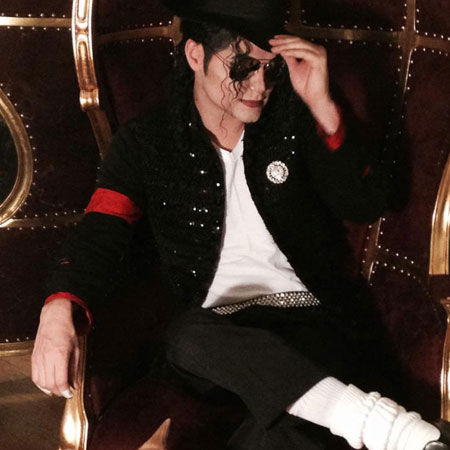 REASONS TO BOOK
Has been performing as Michael Jackson for over 12 years
Costume changes, choreographed routines & audience interaction
A world-class show by an experienced & professional performer
Can be adapted for both small & large events
Based in the USA & available to perform at events worldwide
Musical Shows, Cabaret and Stage Shows, Lookalikes and Impersonators, Walkabout Entertainment, Michael Jackson, Tribute, Lookalikes and Impersonators

His explosive shows create an authentic Michael Jackson experience with multiple costume changes, choreographed routines, original set designs, incredible vocals and audience interaction. Having met Michael Jackson in 2003 and again in 2009, this act is dedicated to keeping the King of Pop’s legacy alive. No event is too small or too big for this tribute performer and he can create a bespoke performance to suit your event needs.

His previous clients include MTV, Estee Lauder and Madame Tussaud’s. A professional and experienced performer you can rest assured that he will make your event a success!

" …absolutely AMAZING!!! I hired him for my 30th birthday party, and there were maybe 25 people crammed into my living room. He rocked it like he was performing in front of a sold-out arena!! His moves are FLAWLESS, his look is FLAWLESS and he was an absolute pleasure to work with. My guests were pulling him every which way for pictures after he performed and he was INCREDIBLY accommodating; he was so sweet through the whole "ordeal!" His love for Michael is extremely apparent; you can tell he's doing this because he loves to do it, not solely for a pay day. If you love Michael like I love Michael, then [he] is worth EVERY. SINGLE. PENNY. He gave me a night that I will remember for years to come!! Long live MJ!!! "

" …fantastic to work with, he was professional, personable and reliable. [He] captures all aspects of Michael Jackson, he is mesmerising to watch and a true talent. We would certainly recommend him to anyone looking for a unique act! "