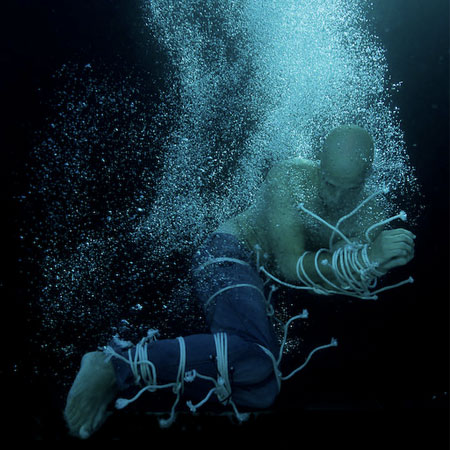 Lauded as the next Houdini, Scarlett Entertainment's master escapologist performs feats that seem like modern day miracles. Having wowed audiences worldwide with stunts like being crucified, set on fire and buried alive, if a stunt seems impossible you can rely on our astounding magician to achieve it.

In his Water Tank Escapology act, our talented illusionist is restrained by handcuffs and leg cuffs and held at the bottom of a water filled tank by a chain. Once submerged, fuel is poured on top of the water and it is set alight. A truly unbelievable escapology show, audiences watch on incredulously as the world class magician dives out through the fire to safety.

Also offering a range of alternative options to suit smaller venues, our escapologist can perform the act vertically by being suspended from rigging and plunged head first into the water tank. Clients can also opt for a mini water tank escape which suits events with limited budgets or space.

Having appeared on television worldwide, our master magician has featured on such shows as Paul O'Grady Live, The Jonathan Ross Show and Jimmy Kimmel. In addition he has starred in a film about his incredible stunts and featured in multiple Discovery Channel Documentaries.

Whether you are hosting a corporate function, private event or product launch, this water tank escape show cannot be matched for its ability to shock and amaze audiences. For more information about the technical requirements of hiring this act, speak to our specialist staff at Scarlett Entertainment today.

Top Tip!
Also an experienced MC and motivational speaker, why not hire this top illusionist to bring a little magic to your conference?

" [This performer] stole the show, nailing acts of derring-do, from fiery straitjacket escapism to stabs of white-knuckle knife-edged frenzy "

" His stunts are 100% real, making him the most riveting performer "