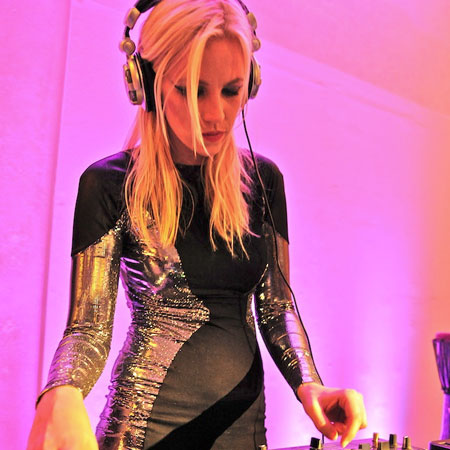 REASONS TO BOOK
First class DJ, drummer and percussionist who will add glamour to any event - plays everything from Latino chill out to modern electro pop
Can use conductive materials and organic products, she can mix and loop your favourite music
She can DJ and play percussion together at same time
Previous clients include Cartier, Mercedes, Landrover, Apple, Harrods...
Based in London and available to perform at events worldwide
DJ with Musicians, Drumming and Percussion, Female DJs, Live Music and DJ

Inspired by her love of beats and rhythm our Dj Percussionist Lyndsay started Djing many years ago. An accomplished percussionist, she has played for artists including The Black Eyed Peas, Ricky Martin, Cheryl Cole and Nicola Roberts (Girls Aloud) before turning her hand to the decks and combining her two loves into her own act, ‘She Plays Drums’, mixing live percussion with her eclectic tastes in music, playing everything from funky house to rock, disco and pop. Current big influences are Soulful house, sampling 80’s hip hop and everything 90’s.

She has since played everywhere from Ibiza to Sydney and her unique style of live percussion and djing is popular amongst the rich and famous. Having recently performed at The BRIT awards 2015 official Mastercard After party, Elle Style Awards, Cosmopolitan Awards, London and Paris fashion weeks, Hed Kandi, Mahiki, Bungalow 8, Annabel’s, The Ivy, Somerset House and The Box, as well as for private clients including Erin O’Connor, Alexander McQueen and Richard Branson.

Lyndsay regularly works with brands tailoring music to suit individual events, including Apple, Topshop, America’s NFL, Stella & Dot, EE, Mercedes, Landrover and Sotheby's. She has presented a show for the Disney channel,”Pro XD” and is featured with Mika in the latest San Miguel advert.

Contact our team of entertainment experts to book the DJ Percussionist for you event.