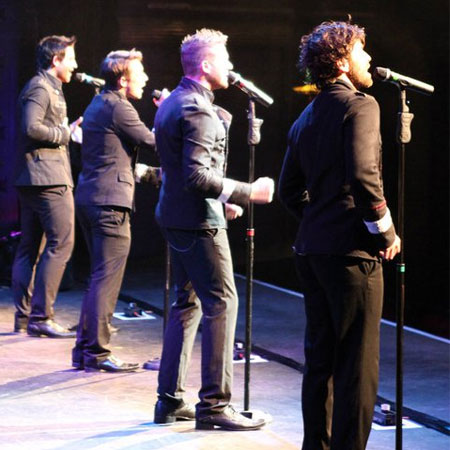 REASONS TO BOOK
As seen on ITV1's Daybreak & described by Gary Barlow as "Brilliant"
Appeared in many theatres inc Manchester Palace, Liverpool Empire, Torquay
Performed on the Royal Caribbean cruise to 2000 people for every show
Can become a 5 piece as they team up with amazing Robbie Williams tribute
Based in the UK and available to perform at events Worldwide
Boy Band Tribute, Take That, Tribute, Lookalikes and Impersonators

This Take That Tribute have been featured on ITV1′s ‘Daybreak’ and have had rave reviews from many people including TV personality Ricky Tomlinson,  Jason Orange’s mother and MR GARY BARLOW himself who said the lads were ‘Brilliant’. This Take That tribute act really is one of the best tributes to Take That around! Don’t just take our word – Take Gary Barlows! They are the ONLY Take That tribute act in the land to have ever been praised by Gary. Book now and you’ll find out why!

These lads are all professionally trained and are currently appearing in theatres all over including Leeds Grand, Manchester Palace, Liverpool Empire, Torquay Princess, Edinburgh Playhouse, York Opera House and Newcastle City Hall to name just a few.

Featuring Danny as ‘Gary Barlow’ who has been touring the country for the last four years in this role receiving rave reviews.

They are also available to take bookings with a tribute to Robbie Williams who will join the boys onstage.