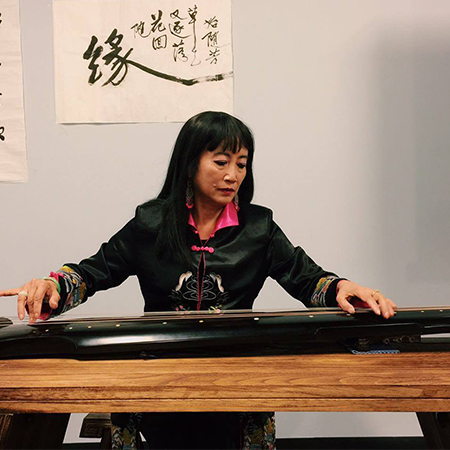 This wonderful Chinese Zither Player is guaranteed to captivate guests at your upcoming event or celebration by playing beautiful melodies with her qin, an ancient seven stringed zither, with is a traditional Chinese instrument with more than 2,500-year history.

Trained as a musician in both China and Paris, this qin player not only plays Chinese zither pieces but she also sings. She was recently invited to play some recitals at the prestigious Metropolitan Museum of Art (MET) in New York, where she’s currently based.

Not only a great qin player but also a recognised author, our traditional Chinese musician has written several articles based on this instrument and two books based on the seven stringed zither’s history, aesthetics and philosophy.

Our zither musician can play traditional Chinese music such as Confucian, Daoist and Buddhist pieces. Her repertoire contains over 50 pieces including her own compositions. ‘Pleasant Evening’, ‘Plum Blossoms’ or ‘Flowing Water’ are among some of the popular melodies she enjoys performing.

Especially loved by traditional Chinese music lovers, her zither performances can be enjoyed by all sorts of audiences. Suitable for art galleries, museums, exhibitions, trade fairs, cultural events, gala dinners and many more, this live musician will delight listeners with her soft and captivating Chinese zither pieces.

This talented traditional Chinese musician is also a very skilled calligrapher. Check her Chinese Calligrapher page to find out more about her calligraphy pieces for live events and calligraphy workshops.

At Scarlett Entertainment we pride ourselves in providing live music entertainment and traditional Chinese acts for events in the US and all over the world.

Enquire about this sensational Chinese Zither Player by contacting us today. Our in-house team of Entertainment Experts will be more than happy to provide further details on this live music entertainment option and assist you in the booking process.