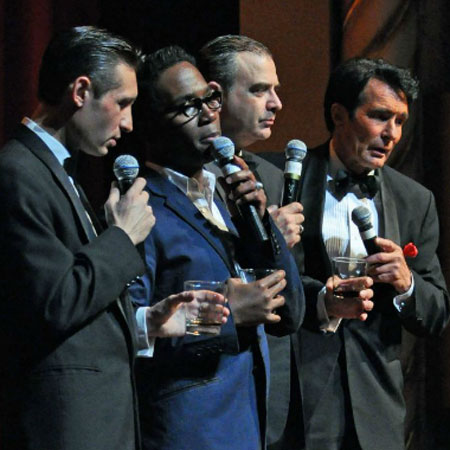 REASONS TO BOOK
A Las Vegas rat pack that offers an authentic rat pack experience based on Frank Sinatra, Dean Martin, Sammy Davis Jr. and Joey Bishop
A critically acclaimed production that draws on the performers own personal connection to the iconic rat pack
An avant garde theatrical production based on the musical and comedic legacy of the rat pack
Features exciting new arrangements of classical songs and original never before heard songs written by the late Ron Miller
Based in Las Vegas, USA and available for worldwide bookings
1920s and Vintage Music, Covers Singers and Duos, Live Music and DJ, 1950s and Rock and Roll, 1960s and 1970s, Themed Entertainment

A Las Vegas rat pack experience that is based on the lives and careers of legendary rat pack Frank Sinatra, Dean Martin, Sammy Davis Jr. and Joey Bishop. Drawing on the performers own personal connection to the iconic rat pack - this theatrical production allows the producers to tell the story like no one else can.

A rat pack tribute show act that brings to life the magical moment in time that everyone wanted and still continues to want access to. Creating an modern theatrical production based on the musical and comedic legacy of the rat pack that captures the relationship, love, respect and timeless laughter of the iconic rat pack.

Having toured throughout the US in hundreds of performing arts theatres to phenomenal critical acclaim. Boasting a truly uniqueness and originality the show takes audiences on an emotive journey that will have every guest wanting more.

With exciting new arrangements of classic songs and original never before heard songs written by the late, best selling songwriter Ron Miller along with recorded voiceovers made by the late comedic genius Buddy Hackett, tis rat pack tribute show embodies everything about the renowned icons.

The perfect Las Vegas rat pack for any event looking to capture the excitement of the 1950s and 1960s and bring music history to the 21st century. Whether you are hosting a corporate event, private party, themed event or grand occasion, our critically acclaimed rat pack show is guaranteed to strike a chord with all audiences.

With a band of musicians and team of producers also working behind the scenes, our rat pack boast a memorable performance that is of the highest calibre.

To book our Las Vegas rat pack or for more information, contact our Entertainment Specialists today.

" He is my first choice to play me. Honestly I wish I had been that good! "