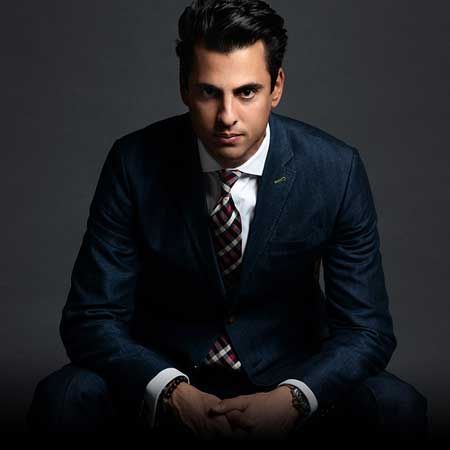 REASONS TO BOOK
An unforgettable mentalism and illusions show performed with warm energy, comedy and an amazing connection with the audience
This artist creates an entertaining and interactive show that can be performed as a stage show, a close-up act or a roaming act amongst your guests
For the past 20 years this artist has performed WOW worthy shows displaying the extraordinary abilities of the human mind all over the world
Previous clients include Dreamworks, Rolex, Paramount, Coca Cola and Target, and has been seen on America’s Got Talent and Ellen Degeneres
Based in Las Vegas and available to perform at gala dinners, private and corporate events, festivals, product launches and more worldwide
Magic and Illusion, Illusionist, Magic Stage Show, Mentalist, Cabaret and Stage Shows, Magic and Illusion Show, Talent and TV Show Personalities, TV Show Talent Acts

Over 15 million people worldwide have witnessed this incredible illusionist and mentalist’s sensational performances when he appeared on NBC’s hit show America’s Got Talent. Having performed for many of the top fortune 500 companies and in front of some of the world’s biggest celebrities such as Muhammad Ali, Robert De Niro and Steven Spielberg, he is a highly experienced entertainer renowned for his professionalism and wow-factor!

For the past 21 years, this acclaimed illusionist and mentalist has been creating and perfecting incredible grand illusions and feats of mentalism and during his career has received numerous accolades including The Magic Olympics Award by the Academy of Magical Arts in Hollywood.

This mentalist offers a highly entertaining and interactive performance that displays the extraordinary abilities of the human mind. His warm energy and fun sense of humour enables him to form a lasting connection with his audience and is an important part of both his grand illusion show and close-up illusion act. He knows information about his audience members without ever having met them before and can predict completely random acts that will happen throughout his show, hours in advance!

A versatile performer able to offer both a stage show and close-up act, he is the perfect choice for all kinds of events; whether you’re looking to draw footfall to your stand at an exhibition or trade show with some impressive small-scale illusions, or wow audiences after dinner with an all singing, all dancing grand illusion show. Whatever your event our Mentalism and Illusion Show is guaranteed to meet and exceed your event entertainment needs.

For more information on what we can offer you for your special occasion, contact our Entertainment Co-ordinators today and let us help you turn your event into something extraordinary.