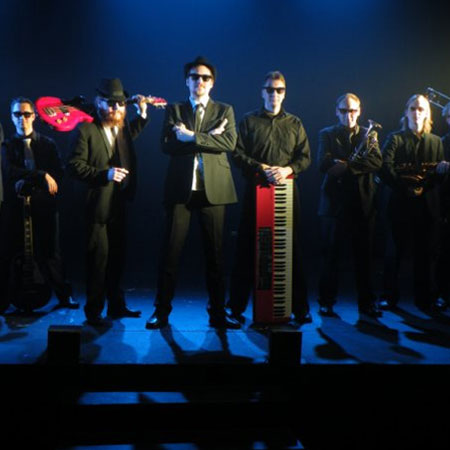 This act are an eight-piece strong Blues Brothers Tribute Band with a ‘Blues Brothers’ theme. Delivering a fast-paced, high octane performance of the most iconic tracks in both Blues Brothers movies. With a full horn section, keys, drums, bass, guitar, harmonica and vocals, this Blues Brothers tribute are capable of producing a sound that will kick-start any party into life.

With over two hours of set list to choose from, a set list which is expanding constantly, you’ll always be treated to the best that this tribute band can offer. All kinds of music catered for; Funk, Soul and Rhythm and Blues, as far as they’re concerned that’s all the kind of music there is.

This is a Blues Brothers Tribute act with real wow factor and a guarantee not to disappoint...

" You guys were absolutely amazin..... you made the night at Jims birthday party I was still getting texts and emails a week later from our friends and family apparently almost everyone in Aberdeen heard about the party that night and wished they were there. Cant thank you enough for making it a birthday to remember... Great fun, Great music and fab guys. "

" Lads - I have to say what a great gig today in Swanage. You put a smile on my face - and my wife would tell you that's an achievement in itself. Seriously, thanks for a great show - we thought you were great fun and musically SPOT ON! "

" Thanks for the great show you put on for the Harlow festival last week, the band really got people dancing and singing along to all of the blues brothers songs, hope to see you again next year "

" We would like to thank the Blues Brothers Band for making the Little Venice Cavalcade so special once again. We saw you in 2008 and we were blown away by your music. When we heard you were doing this years Cavalcade (2009), we were very excited. You certainly did not disappoint us or all the other boaters who were at the event. We had such a perfect evening and we are sure everyone enjoyed themselves as much as we did. We look forward to seeing you at another boat festival or indeed at the Little venice Cavalcade again. Good luck for the future. "

" Many many thanks for making our 50th birthdays so memorable. I have had lots of emails from our guests telling me the same, and how much they enjoyed the evening. Please pass on our best wishes and thanks to the other guys. Good luck for the future, please keep banging out some of the best tracks ever! "