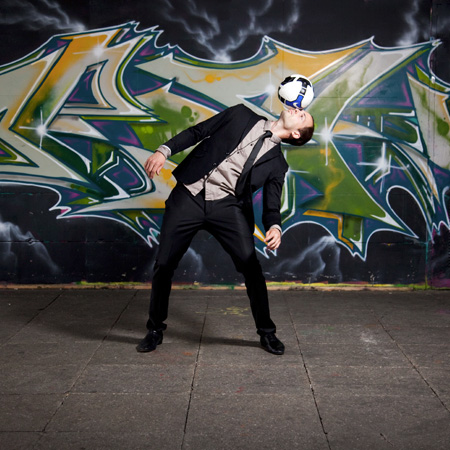 Daniel is a highly regarded Professional Football Freestyler and four-time Guinness World Record Holder. He has a wealth of experience in performing and entertaining, whether to an intimate crowd,  or to 75,000 at the Gadget Show Live at the Birmingham NEC.

Daniel began his career in 2006 by winning the national freestyle competition with Pringles and was crowned the ‘UK Pringles Keepy-Uppy Champion’. He has ‘body doubled’ in adverts for professional footballers such at Real Madrid star Kaka, been in adverts and campaigns for Hyundai and the Champions league, performed at the Carlsberg end of season party for football stars including Dirk Kuyt and Luis Suarez and travelled all over the world including Europe, the USA, the Middle East and South Africa displaying his skills.

In 2011 Daniel achieved a lifetime ambition by becoming an official Guinness World Record Holder. Refusing to settle for just one though, Daniel continued to push himself to the limit and is currently the holder of four World Records! His favourite of these is the fastest time to run 100m with a football balanced on the forehead, which did in an amazing 18.53 seconds! As of 2013 he now holds 4 Guinness World Records.

Daniel takes inspiration from other creative art forms such as break-dancing and gymnastics, which he incorporates into his performances.

Although he is an extremely talented football freestyler, he also has the ability to engage with people, and his warm personality and interactive social skills ensure he can connect with any audience in any situation.