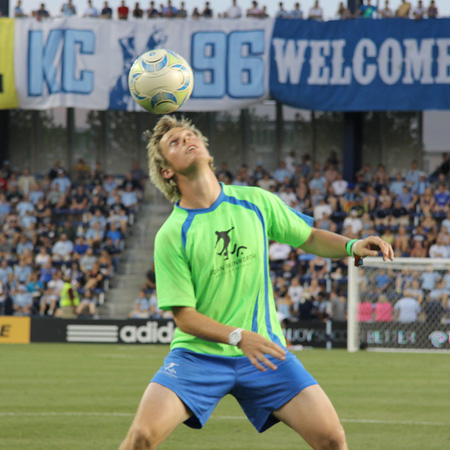 REASONS TO BOOK
Both World and European champion and also holds 5 World Records
Performed at the World Cup Final, Champions League Final & The Grand Prix
A regular on shows such as Soccer AM, Sky Sports & CBBC
The only man to complete the London marathon whilst keeping up a ball
Based in the UK & available to perform at events worldwide
Themed Entertainment, Sporting Theme, Speciality and Novelty Acts, Football and Basketball Freestyler, Sporting

John is regarded as one of the best Football Freestylers in the world. He has been both world and European champion, holds 5 World Records and is the only man to complete all 26.2 miles of the London marathon whilst keeping up a ball.

John’s performances have taken him worldwide to over 30 different countries including shows at the World Cup Final, Champions League Final, The Grand Prix and even the West End Stages! He is a regular on shows such as Soccer AM, Sky sports, CBBC in the UK and has been seen on TV shows in Japan, Sweden and America.

John has been a weekly feature on BBC's Match of The Day Kick about this year as well as performing on Question of Sport, BBC’s Marrying Mum and Dad and Sam and Mark’s CBBC show.

John runs a Soccer Freestyle academy in the US which is now in 3 states, Kansas City, Chicago and Rhode Island and has recently launched his own brand called “Keep up” clothing and accessories for freestyle.

John’s charity work goes before him and has seen him travel to Africa and other parts of Europe as well in this country to help support different charities and causes.