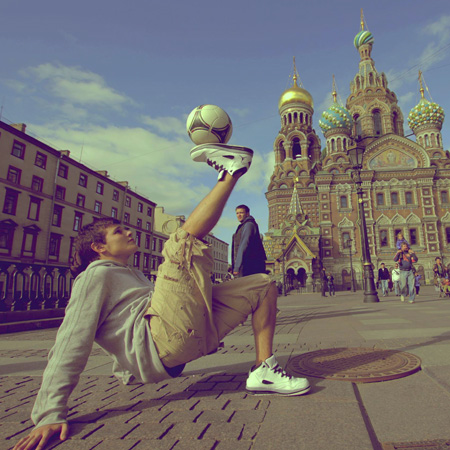 REASONS TO BOOK
Unique combo tricks with the style that makes everything look simple
Performed for 76,000 people at Manchester United's stadium Old Trafford
Competed for the UK in the World Championships in 2013
Previous clients include UEFA, Ford and Barclays
Based in London & available to perform at events worldwide
Football and Basketball Freestyler, Sporting, Themed Entertainment, Sporting Theme, Speciality and Novelty Acts

Tom is regarded by many as not only one of the best Football Freestylers in the UK, but one of the finest the world has ever seen. Tom combines his unique combo tricks with the style that makes everything look simple. Tom is fast becoming an inspiration for not only younger generations of soccer freestylers but also idolised by many, who are years his superior.

At 18 Tom has already added a lot to his CV, by winning a competition by Playstation, where Tom carried the match ball onto the pitch for the Champions League Final. Tom feels this is his proudest moment in freestyle so far. Tom has also wasted no time in making it onto live national television with performances on the famous TV show Blue Peter as well as being a regular performer at "The Masters Football" all over the UK.

Tom has performed at one of the world's biggest football grounds Old Trafford, where he performed for 76,000 people LIVE, putting in a flawless performance. He has also worked with Adidas as well as Chelsea FC and Brazilian Soccer Schools to name just a few.

Tom is always with a football continuing to improve and add to his locker already boasting hundreds of tricks, Tom is already becoming a recognisable name and he is sure to be heading to the top of freestyle in a long career. Tom competed for the UK in the World Championships in 2013, as well as performing for UEFA, Ford and Barclays around the time of the UEFA Champions League Final.