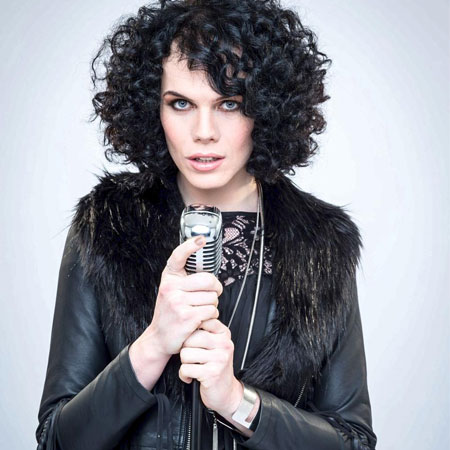 REASONS TO BOOK
Sensational Transgender singer, musician & recording artist with an incredible voice
As seen on The Voice UK 2016 where she reached the semi-finals with Team Paloma
Received praise from big names & recording artists such as Kate Bush & Years & Years
Available to book as a solo singer or with a full band playing all original music
Book Jordan Gray for events across the UK & worldwide
TV Show Talent Acts, Talent and TV Show Personalities

Singer Jordan Gray (Tall Dark Friend) found international fame after her appearance on The Voice UK in 2016. Now one of the UK’s most iconic Trans musicians and an inspiration to the LGBT community, she is available to book as a solo originals singer and cover singer for events around the world. Her piano/synth-based styles hops from genre to genre, featuring mind-blowing medleys, unique mash-ups, original tracks and covers from the 20s to the present. Full band bookings (featuring all original music) are also available. A talented event singer, she will create an ambience at your event that your guests won't forget.

A sensational vocalist and musician, as well as an indie author and LGBT activist, Jordan wowed the nation when she appeared as part of Team Paloma on The Voice UK 2016. Having initially failed to secure a chair turn at her Blind Audition, in a whirlwind series of events she was reinstated and made it to the semi-finals of the show alongside fellow singer and Paloma team mate Heather Cameron-Hayes. Her passionate performances of Kate Bush’s ‘This Woman’s Work’ and Deacon Blue’s ‘Real Gone Kid’ left the coaches and nation in tears, and her emotional battle stage duet with Theo Llewellyn is widely regarded as one of the ‘most honest moments in reality television’.

Since her appearance on the show she has been publicly praised by the likes of Kate Bush, Years & Years and Florence of Florence And The Machine. She is frequently featured on national radio and chart-topping podcasts and her side-line spoken word and UK rap project landed her a guest spot on Scroobius Pip’s ‘Distraction Pieces’ ep. #57. Former guests include Russell Brand, Zane Lowe and Simon Pegg. Not just a stunning event singer and recording artist, Jordan is also a passionate LGBT activist and Trans ambassador for number of flagship government schemes and prominent LGBT organizations across the UK, including ‘Educate & Celebrate’. As of 2016 she is nominated for a National Diversity Award. Her revolutionary appearance on The Voice UK as the show's first ever Transgender contestant set a benchmark not only for the show but also the entertainment industry. She is fast becoming one of the most prominent Trans musicians of recent years.

Our exclusive event singer Jordan Gray regularly tours the UK and Scandinavia captivating audiences with her unique vocals and performance style. Able to tailor her stage performances to perfectly suit large-scale corporate events and intimate affairs, Jordan is the perfect choice of musical entertainment for your next event.

Our entertainment specialists are on hand to help with all of your specific entertainment needs and requirements and have years of experience creating bespoke performances and entertainment solutions to perfectly suit a whole host of events, venues and budgets. If you’ve got a specific requirement or would like to discuss singer Jordan Gray appearing at your event, contact us now.