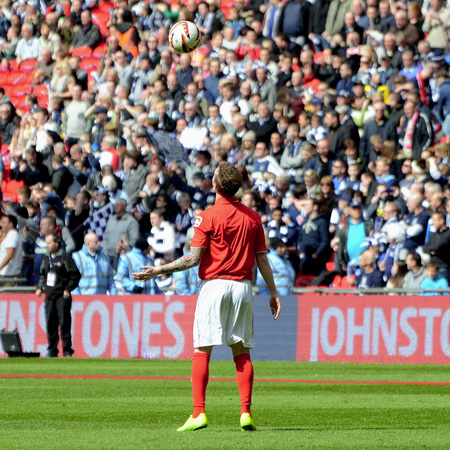 REASONS TO BOOK
One of the most innovative Football Freestylers in the game
UK's Best Football Freestyler at the Red Bull Street Style Championships
Performed in front of a Wembley crowd of 80,000 people for the FA
Worked with big name brands such as Canon, Virgin, Puma & Noki
Based in London & available to perform at events worldwide
Speciality and Novelty Acts, Themed Entertainment, Sporting Theme, Sporting, Football and Basketball Freestyler

John is a Professional Football Freestyler based in London, UK. John regards himself as a pure entertainer, he is the complete showman and his personality can really be seen on stage. John tries to be different with his brand of football freestyle, trying to step out and do things everybody else isn't doing, to be unique.

John was crowned the UK's Best Football Freestyler at the UK Red Bull Street Style Championships. John went on to compete for the World Title in Brazil which has led John to be regarded as one of the top Football Freestylers in the world today. John has gone on to work with Red Bull on numerous occassions after this.

He has toured extensively, John has worked with big name brands such as Canon, Virgin and Puma to name a selection of his portfolio. John has performed in front of a screaming Wembley crowd of 80,000 people for the FA, UEFA and The Football League on numerous times. John is regarded as one of the most dedicated and innovative Football Freestylers in the game.

Always aiming to please and leave the stage in a state of awe, John gave up Professional Football to become a Football Freestyler. John has recently been working closely with Virgin and Nokia to promote and launch new products for their new TV ranges and Phone ranges.

Performing at a wide variety of events such as music festivals, 02 wireless and Fm4 frequency (Austria) John's Football Freestyle skills have taken him to all corners of the globe and it's no coincidence that he has continually been rebooked by our clients.