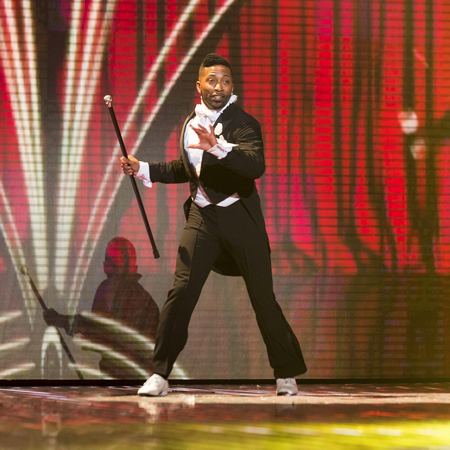 Joseph burst into the living rooms of millions of Britain's Got Talent viewers when he danced his way to the semi-final. He wowed the judges with his dazzling homage to the Hollywood greats, tipping his hat to the choreography of Fred Astaire and The Nicholas Brothers, fusing modern moves with classic style.

Joseph was born into a large family, the eighth of ten children and from an early age he demonstrated a passion for dance.

Inspired by legends such as Michael Jackson, James Brown, Fred Astaire and The Nicholas Brothers, until the age of 16 Joseph was a self-taught dancer. He learned street dance, break dance and jazz from television, films and online access to archive footage.

Wanting to expand his knowledge and dance technique, Joseph attended a performing arts course at Clarendon College. He graduated after completing a BND 1 and 2 along with a HND in Performing Arts and has since returned to Clarendon as a guest teacher.

Joseph Hall is available for West End theatre contracts, television and film appearances and touring. He is an accomplished singer and also has a CRB certificate.

" It was classy, you are such a great, elegant showman, that’s what you are. You completely covered the whole stage. Amazing! "

" You are like...who’s the guy who won the Gold medal for the 100m? Usain Bolt! You were like a greyhound out of a trap when that track started. You couldn’t have given it more energy. I like the whole retro thing. As a piece of entertainment, it was one of the best we saw… "

" You came out all fired up and boy did you put on a show! It felt classic, to fill the stage on your own is no easy feat and you did it! "

" One of the hardest things to do is be a solo dancer and fill the stage but you did it. "