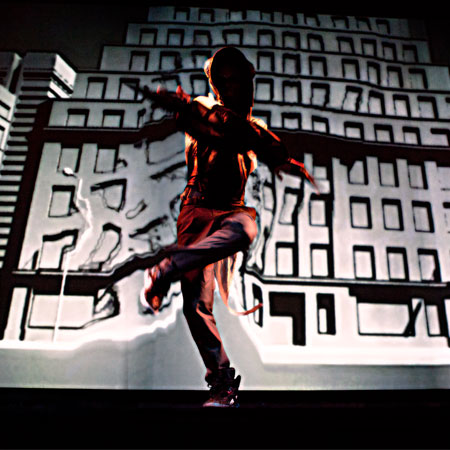 This interactive video mapping project mixes real-time figure tracking with projection. The result is a dynamically choreographed duet of human and computer, or the marriage of physical movement and algorithmic animation. Because what you see isn't just careful, pre-programmed staging. It's real-time visual synthesis, based upon simulated physics.  The effect is one part movie, one part video game, one part live art all living and playing together in one plane.

The Performance Team has worked with artists and events such as:
- Michael Jackson
- Madonna
- Black Eyed Peas
- Usher
- The Official Grammy’s Celebration
- Coachella
- Festivals around the World

In their first year, they have been able to share the stage with:
- Alicia Keys
- Katy Perry