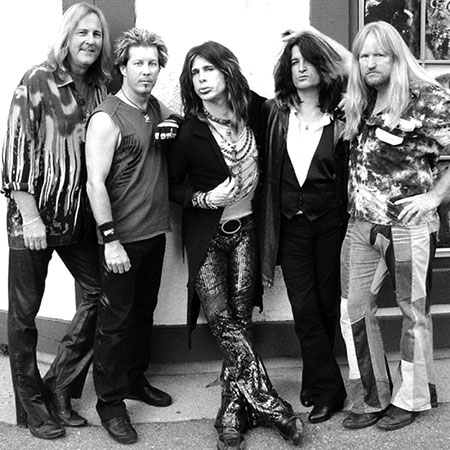 REASONS TO BOOK
Considered the best Aerosmith tribute in the world
Professional musicians with years of stage and studio experience
Perform all the classic hits from the band’s legendary repertoire
Ideal for parties, themed events, festivals, corporate functions & more
Based in Los Angeles and available to perform at events worldwide
Tribute, Lookalikes and Impersonators, Other Tributes

Aerosmith are the best selling American rock band of all time, having sold more than 150 million records worldwide since appearing on the music scene in the 1970s with their characteristic blues-based hard rock sound. What could be better than bringing the legendary look and music of ‘the Bad Boys from Boston’ to your event with our fantastic tribute band, who walk, talk, act, perform and even look just like Aerosmith!

Performing all of their greatest hits, from classic songs such as "Walk This Way," "Sweet Emotion," and "Toys in The Attic," to more current hits like "Dude Looks Like A Lady," "Jaded" and "Don't Wanna Miss A Thing”, this band will really have you believing you’re watching America’s greatest rock and roll band on stage!

Featuring an amazing Steven Tyler impersonator and a brilliant Joe Perry lookalike, this tribute band has a commanding stage presence and an electrifying performance style, with all band members really looking and sounding just like the Aerosmith members they portray. Certain to be a hit at your event, our Aerosmith tribute band will definitely bring the wow factor!