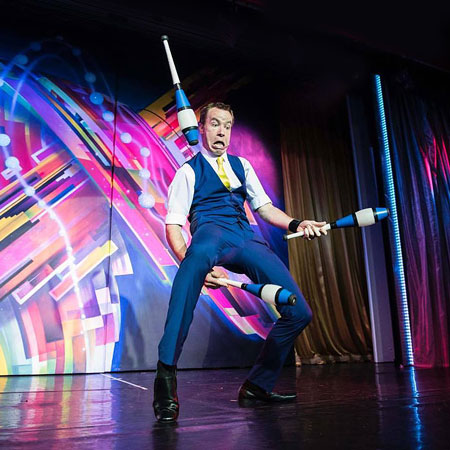 REASONS TO BOOK
World record holding comedian and juggler will have your guests in stitches
Incredibly hilarious entertainer and juggler who can juggle with any object
Former Australia’s Got Talent contestant now performs internationally
Previous clients include BMW, McDonald’s, Toyota and Royal Caribbean Cruises
Based in Sydney, Australia and available for events all over the world
Comedy Act, Juggling and Diablo Act, Circus Entertainment, Shows for Children, Cabaret and Stage Shows, Speciality and Novelty Acts, Family Entertainment, Children and Family Shows

Our hilarious Australian Comedy Juggler is the kind of entertainer that has audiences in stitches and leave the event with big smiles on their faces. He is a world renowned comedian and juggler who has performed on some of the biggest stages and at some most famous events all over the world.

Bringing a much needed fun element into juggling, the Australian Comedy Juggler is incredibly witty, somewhat of a slapstick hero and probably one of the best jugglers your guests will have ever seen. Amongst his jaw-dropping antics, he likes to engage with his audiences and he will have anyone from grown-ups to children participating in some of his stage shows.

The World Record holding comedy juggler is an astonishing entertainer and variety performer. He is constantly devising new routines with new gags and impressive juggling tricks. There honestly isn’t anything this guy can’t juggle with. From standard objects like balls and clubs to bowling balls, axes, fire and chainsaws. He event once juggled with a little boy.

Ideal for family friendly events, variety shows, cruise ships, and even corporate events, our Australian Comedy Juggler can engage with any audience and make everyone laugh. Some of his previous clients include BMW, Carnival Cruises, McDonald’s, Toyota, Royal Caribbean Cruises, and MasterFoods.

The Comedian and juggler is a variety performer of the highest calibre. His many years of experience, both nationally and internationally, have given him the confidence to push the boundaries with hilarious and impressive results.

Based in Sydney, the Australian Comedy Juggler is available for worldwide events. Contact us at Scarlett Entertainment to book the wonderfully fun juggler for your event.