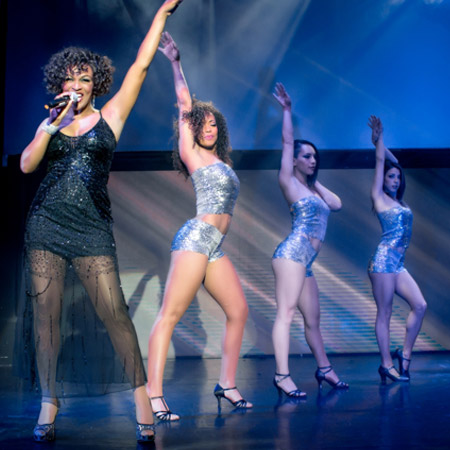 No stranger to the entertainment industry, our authentic Whitney Houston impersonator has perfected the distinctive singing voice, iconic style and movements of one of the most legendary female singers of all time.

This beautiful tribute artist is not only a skilled singer with a powerful voice, but also a professional actress and music producer, having featured with Will Ferrel in popular movie "Anchorman" and has produced high quality records for herself and other artists. An all-round entertainer with experiential credits to match, our Whitney tribute has performed on the Oprah Winfrey Show, MTV Music Awards, sung alongside Smokey Robinson and even featured on MC Hammer's "Can't Touch This" album. With bags of experience, book our Whitney Houston impersonator today and you know you will be in safe artistic hands!

A treat for Whitney fans of any age, this authentic tribute show features all of Houston's best loved songs including I Will Always Love You and I Wanna Dance with Somebody. Able to perform at corporate events, theatres, festivals, private parties and weddings, our talented Whitney soundalike will pull out all the stops in her spectacular show! Hire our sparkling Whitney tribute from Scarlett Entertainment Las Vegas today!

Top Tip
•    Do you want a particular Whitney song to be performed at your event? Let us know and we can liaise with the artist to ensure that the song is performed for you.