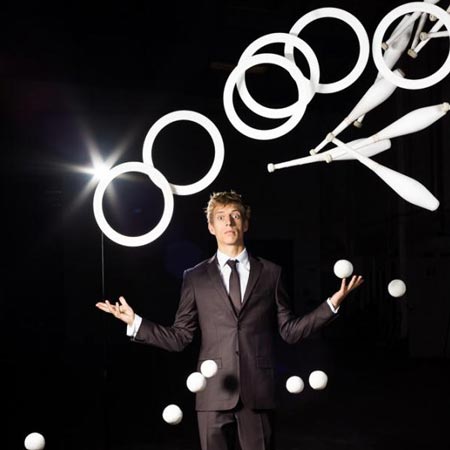 REASONS TO BOOK
A hilarious comedian juggler who performs hilarious sketches, impressive feats of juggling and multi tasking as you have never seen before
Combines juggling and comedy to such a brilliant effect that his unique performance has his audience roaring with laughter from start to finish
Has worked all over the world on luxury cruise liners, at festivals, corporate events and comedy clubs
A unique blend of stand up comedy and juggling
Based in Bristol and available for worldwide bookings
Comedy Act, Circus Entertainment, Juggling and Diablo Act, Speciality and Novelty Acts

A hilarious comedian juggler who performs hilarious sketches as well as impressive feats of juggling and multi-tasking as you have never seen before! Combining juggling and comedy to such a brilliant effect that his unique performance has his audience roaring with laughter from start to finish.

A charmingly funny and engaging comedy act that will have your guests on the edge of their seats and rolling in the aisles with laughter, this brilliant performer will not disappoint.

With a unique show that is tremendously funny yet incredibly impressive, this winning combination of humour and talent won him the award for British Young Juggler of the Year and has lead to TV and radio appearances as well as appearing all over the world to international acclaim.

A popular performer throughout the UK and further afield our comedy act is a fan favourite on some of the biggest and most luxurious cruise liners, boasting a one-man performance that fills every room with laughter. Always striving to push the envelope, Jon continues to change the game and take risks that create an outstanding performance that leave audiences stunned with his ability to juggle, multitask and perform.

With over 15 years of experience, our juggler and comedian has perfected his routines making for slick performances that are interspersed with acid-tongued humour that appeals to all ages, on all stages in most places.

From international cabaret tours to high profile theatre shows, television appearances and spots at some of the biggest venues in the world, Jon has created a show that is diverse, engaging and incredibly funny.

To book our Comedian Juggler or for more information, contact our Entertainment Specialists.