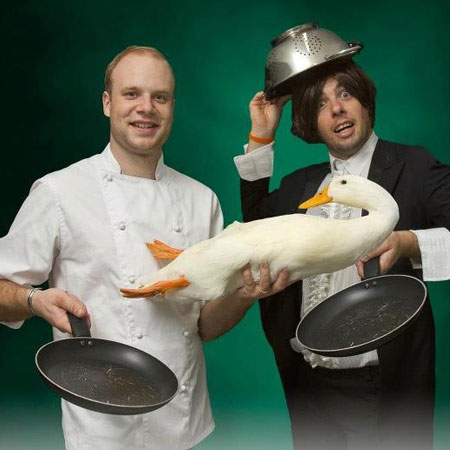 This is one of the world’s most original magic acts! Comedy and magic have always been a well-known recipe for success, so to spice things up a bit Nick has added some world-class cookery to the mix creating a fast paced show that will have audiences on the edges of their seats.

Nick and his apprentice chef deliver an action-packed comedy magic chef performance featuring flying tables, food trickery, a mind-reading duck and plenty of audience participation! One lucky member of the audiences will even get a little too close for comfort with the veggie slicer! Packed full of hilarious stunts and wow-factor moments this professional show will be sure to make a lasting impression.

Nick has been performing this show for over 10 years for over half a million people at trade shows, restaurants, corporate events, conventions and on television. The show comes in numerous forms and can be adapted to suit your specific requirements and event type - Nick is well versed in what makes an exciting and unforgettable show and will be sure to make your event a success!