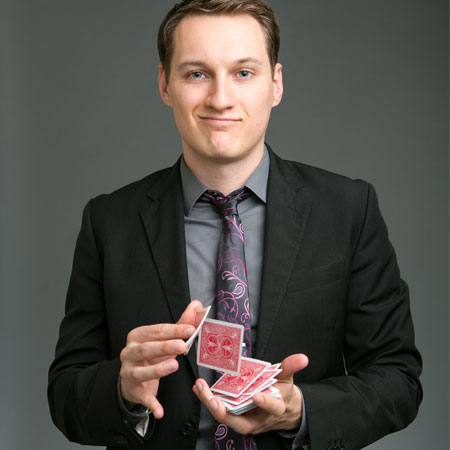 Our hilarious LA comedy magician has over 14 years of professional performance experience. He has performed at events around the world for corporate clients such as Avon, Microsoft, Deloitte and Chrysler and is a regular performer for Disney Cruise Line. Our Comedy Magician's amazing comedy magic show has most recently seen him win awards for “Best Variety Show” and “Critics Pick” and the 2015 Orlando International Fringe Festival.

Our magician's unique blend of comedy and magic will not fail to leave audiences in fits of laughter! Combining mind reading, live stunts and plenty of audience participation with his trademark humor and magic skills, our comedy magician unleashes a funny magic show that your guests will want to see over and over again.

Available to book as a magic stage show or close up magician, our award-winning comedy magician offers world-class entertainment that is perfectly suited to international corporate audiences at company events and trade shows.

Inquire today to book our fantastic comedy magician for your event!

In addition to his standard verbal magic stage show, our professional comedy magician can offer corporate clients a non-verbal magic show packed with physical comedy perfect for international audiences. Get in touch with one of our entertainment specialists to find out more.

" … an amazing magician/physical comedian! His comedic timing and knack for reading an audience make him an entertainment tour de force! "

" Bringing audiences back to the future of magic. "

" Using the word “genius” isn’t out of the question...there is real magic in this highly recommended show. "

" … very easy to work with and I cannot recommend him enough for a corporate event. "

" His performance was top-quality, even though we had a small venue. Not a standard “wannabe magician” act. Nick was very polished, professional and genuinely funny. Highly recommended! "