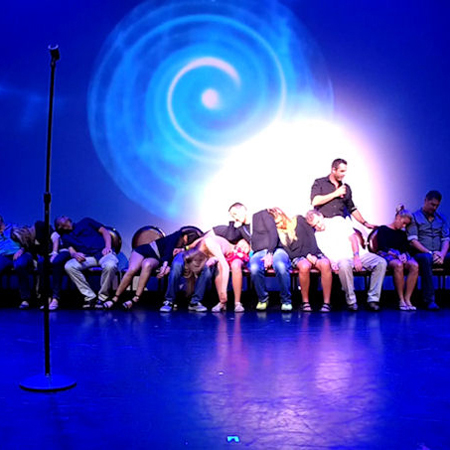 The hilarious Comedy Stage Hypnosis Show is performed by our Australian master TV mentalist, hypnotist and mind magician. The act is totally harmless and totally hilarious.

This Comedy Stage Hypnosis Show runs for a duration of one hour, and will have your audience completely in stitches. You will be astounded by the various, mind-blowing methods of which the hypnotist puts his volunteers into a hypnotic trance and has them carry out a variety of stunts. Various tricks include inability to speak properly, missing numbers and involuntary movements. It is fascinating to watch and your guests will be glad that it isn't them up on the stage.

Our TV hypnotist has been televised in several countries and is a master of the mind, headlining various show tours, some of the world’s largest fringe festivals, and the world's largest, and most luxurious cruise lines.

The video clips speak for themselves. if you want modern, clean hilarity, book our game changing hypnotist today. He is available internationally and guaranteed to wow your guests.

This special act is also avialable as a TV Mentalist And Mind Magician.

Contact our team of Entertainment Coordinators to book the hypnotist for your next event.