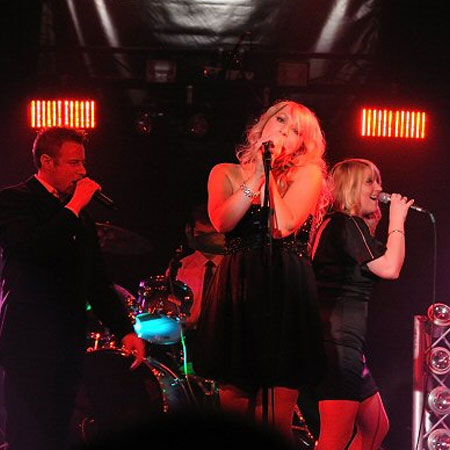 REASONS TO BOOK
Tribute to the feel-good film of the 90s & to the music of Soul & Motown
Played more than 4,000 shows to over 3 million people worldwide
Performed with artists as varied as Edwin Starr, McFly, Liberty X...
Previous clients - Microsoft, Aston Villa, Cisco Systems, Toyota, Granada
Based in the UK & available to perform at events worldwide
Tribute, Lookalikes and Impersonators, Other Tributes

This famed tribute group to the feel-good film of the nineties have been together since they formed in 1995, playing the hits that millions know and love, including Mustang Sally, Try A Little Tenderness, Chain of Fools, Soul Man, Midnight Hour and countless more.

Drawing on some of the best musicians available who have performed for many years with the likes of the Robin Gibb band and Paul Weller - singers who have worked and sang with the originals from that great era of music, Martha Reeves and Edwin Starr - The Commitments Tribute are now recognized as more than just a tribute, they are a unique and original interpretation of the classic Soul and Motown sound.

The Commitments Tribute have co-starred with artists as varied as soul legend Edwin Starr, pop sensations McFly and Liberty X, singer/songwriter Lucie Silvas, singer and TV personality Jane McDonald, the Monsters of British Rock (with original members of Whitesnake, Thunder and Wishbone Ash) - and played to crowds equally as varied !

Since forming, the band have played more than 4,000 shows to over 3 million people in countries such as Belgium, Holland, Spain, France, Germany, Sweden and Dubai, as well as touring all over the UK.

Recent shows have included giant corporate events for multinationals like Ontex International, in Brussels (May 2010), Quantel, in Amsterdam, along with Microsoft, Cisco Systems, Toyota and Novell, as well as touring the French Alps ski resorts (winter 2009), cruise ships, festivals and of course, TV and radio. Versatility is The Conmitments strength.

The Commitments Tribute style of music makes them ideal for any venue or occasion, with the classic sounds of the Tamla Motown / Stax era, appealing to all ages. They come complete with their own P.A. and lighting show.

The band are in constant demand, the electric atmosphere of this fast moving and energetic show is not to be missed.

" The Commitments Tribute were absolutely fabulous. When I booked them I just hoped they would put on a good show. They were awesome. I have had guests ringing me up all weekend thanking me for the best party they have ever been to… good food, great firework display, terrific disco (Phil Callaghan) and an absolutely fantastic band!! I have already passed their details on to a couple of friends who have events to plan, so I think there’s every chance the Commitments Tribute will be invited back to Shropshire in the near future. They were worth every penny and made me and my wife very very happy. Please pass on my sincerest thanks to Gary and the rest of the band. "

" Just wanted to say a big thankyou for a terrific performance at the Roses Theatre, Tewkesbury on Sunday 14th October'07. Where do you get all your energy! Every band member seems to be multi-talented and my wife & I had a brilliant night. I'm a huge fan of the film and didn't thing anyone else could do the music justice but you proved me wrong. We were particularly impressed when there was a power-cut mid-way through the second half - it didn't seem to phase anyone at all and we even had an impromptu performance of "You'll never walk alone' sung by the ace Trumpeter. Thanks again all and we hope to see you again soon. "

" I'd just like to let you know that our party went fantastically well and was in no small part due the the bands that you supplied. Boil up were very good indeed and were excellent backing for us as we sipped champagne and partook of our meal. But the highlight of the night was very definitely the Commitments Tribute. Everybody, absolutely everybody, told me how good they were (and I have some significant music critics amongst my family). I first saw them at Tewksbury Roses Theatre, when both I and my wife thought they were fantastic - and was the reason I booked them for my wife's 60th Birthday. But I reckon on Saturday night, in a more intimate setting, they were even better. I'd like you to get this note to them and perhaps post on their publicity feedback.They were really, really excellent. Thank you! "

" .....if you can't get to see the real thing, then The Commitments Tribute are an absolute must, the best live show performing this type of tribute "