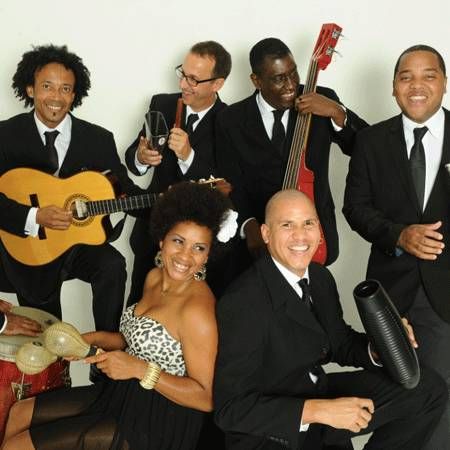 REASONS TO BOOK
Intoxicating fusion of Spanish and African rhythms that gave rise to salsa
Irresistible tropical sound, guaranteed to turn any event into a fiesta!
Flexible line-up that can be tailored to match every occasion
Have performed at Glastonbury, a live session on BBC Radio 3 and much more
Based in London and available to perform at events worldwide
Caribbean Theme, Latin and Salsa Music, World and Cultural Acts, Caribbean, Live Music and DJ, Themed Entertainment

Cuban Band London play authentic Cuban son, the intoxicating fusion of Spanish and African rhythms that gave rise to salsa. They give this irresistible music a contemporary edge, bringing their audiences a truly, sensational, authentic Latin music experience and their music is guaranteed to turn any event into a fiesta!

The Cuban Band has a flexible line-up that can be tailored to match every occasion. Playing as a traditional Cuban septeto, the band performs with 7 musicians - lead vocalist, trés (Cuban mandolin), guitar, bass, trumpet and two percussionists.

The group are having a very exciting year so far with an Arts Council Tour underway, a new album in the pipeline and lots of amazing festivals already confirmed including Glastonbury, The Manchester Jazz Festival and the Rainforest World Music Festival in Borneo - to name but a few!

Since their debut album 'La Maravilla' was released to rave reviews (**** Songlines, The Evening Standard) at the end of 2012, the band have gone from strength to strength. Last year's highlights included playing at The Cork Jazz Festival, The Shetland Folk Festival, The Africa Oye Festival and a live session for Sean Rafferty on BBC Radio 3.

On vocals, and minor percussion, Yuri is an accomplished international singer with a sparkling personality, having performed with the likes of Cachaito of the Buena Vista Social Club.

" The UK's very own Buena Vista band….absolutely tremendous…. music like this and we're all feeling terrific….if you don't start to move to this there is no hope for you! Extraordinary music. "

" People could not help but dance, the band’s energy and enthusiasm was soaked up by a captivated audience! "

" We had great feedback about the band yesterday. Our guests felt transported to a holiday place..! "

" My husband and I had an amazing time watching in Stroud on Saturday – we even attempted a little salsa dancing! "

" Thanks so much for the other evening, we had a great time! You have a great rapport with each other as well as with your audience. "

" Our very own Buena Vista Club… they are irrepressible… a fantastic sound …terrific! "