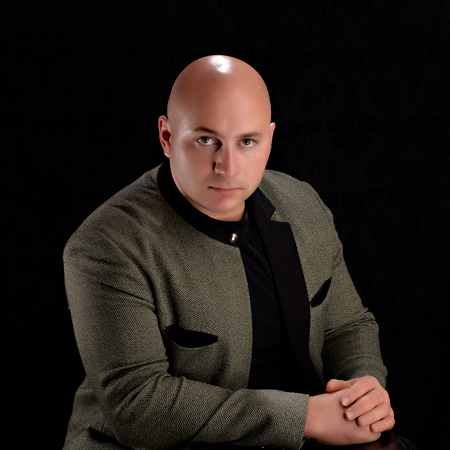 REASONS TO BOOK
Captivating and highly engaging close up magician and illusionist who has performed in many countries
Winner of a close up magic competition at the British Magic Society, the oldest magic society in the world
Very interactive magic show includes lots of audience participation, innovative tricks and brilliant illusions
Suitable for audiences of all types and will tailor his act accordingly
Based in Dubai and available for events throughout the UAE and all over the world
Magic and Illusion, Illusionist, Close up Magician

If you are looking for interactive magic entertainment for your event in Dubai or throughout the United Arab Emirates, our Dubai Close Up Illusionist will not disappoint. This expert entertainer has some completely mind-biding close up magic tricks and highly impressive stage illusions that have amazed caudices of all ages at events all over the world.

Originally from Romania, he discovered a passion for the magic show at a very early age. As a teenager, he perfected his interactive magic skills and sleight of hand on the streets of Budapest in Hungary where he drew large crowds of tourists and offered them an experience they had never had before. He went on to win a Magic contest in Berlin, moved to England and became a member of British Magical Society, the oldest magic society in the world, and later won the British Magical Society Annual Close Up Magic Competition.

Our Dubai Close Up Illusionist is the perfect act for engaging audiences whether as an ice breaker or dinner table entertainment. His vast abilities range from close up magic, stage illusions, mind-reading and hypnosis. whether amongst guests or on stage, his interactive magic show will always feature audience participation and make your guests part of the entertainment.

The close up magician has performed all over the world including on one of the biggest cruise line companies in the USA and since relocating to the UAE he has performed for Sheikh Saeed Bin Tahnoon the Ruler of Al Ain.

If you would like to book a fascinating interactive magic show for your event, please contact us at Scarlett Entertainment.