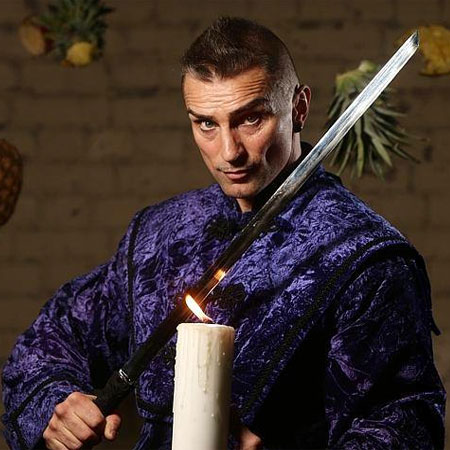 REASONS TO BOOK
Sensational magician and mentalist will spice up your event
A fusion of magic, suspense and dangerous stunts will WOW audiences
Original routines create an unforgettable show
Appeared on Britain’s Got Talent and numerous TV shows across the world
Based in the UK and available for events worldwide
Stunt Act, Illusionist, Speciality and Novelty Acts, Talent and TV Show Personalities, TV Show Talent Acts, Magic and Illusion Show, Magic and Illusion, Cabaret and Stage Shows, Stunt Shows

If you are looking for a show that is unique, compelling and different then look no further. This award-wining mentalist’s show fuses together magic, suspense and dangerous stunts to create one-of-a-kind performances that will have audiences gasping in amazement. Despite not speaking a single word during his shows, this magician possesses a phenomenal stage presence, and his performances have won him first place at the "World Championships of Magic" as well as numerous other highly coveted international awards.

His performances are truly spine tingling with a high visual impact and have won him critical acclaim amonst fellow artists and producers, and stunned audiences around the world. His seemingly impossible stunts and impressive illusions will undoubtedly bring the WOW factor to your event!

Contact us today and make your enquiry about this incredible spectacle that will get people talking for years to come.