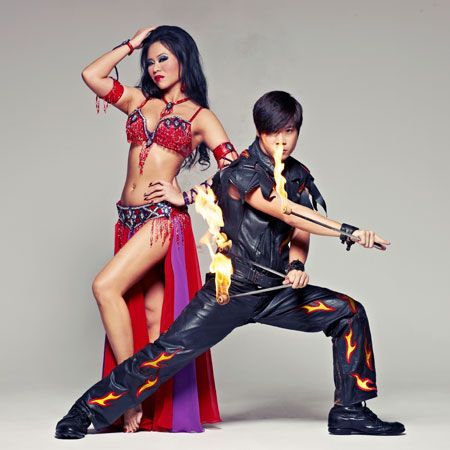 Danny is quickly establishing himself as one of Asia’s premier fire illusionists. A pioneer in the local fire arts scene, he blends sophisticated magical stage illusions with his signature brand of hard-hitting fire spinning and stunts.

Crowned “The Flame of Asia” by peers and fire art communities around the world, he is a respected teacher and exponent of the art of “Freedom Fire”, an original and highly flamboyant brand of fire and poi twirling incorporating both pseudo martial arts and hypnotic trance techniques based largely on exhilarating speed and power.

In 2005, Danny took the juggling scene by storm with his signature fire poi spinning acts. Winner at the National Juggling Championships, his works on fire was featured on the cover of the Straits Times Sunday Life in 2006, thus introducing the nation to a new art form, thrilling and fiery in nature. He was also a distinguished guest at the First Asian Fire Festival, Bonfire, held at the Singapore Esplanade where he performed alongside well known international fire artists, such as critically acclaimed Carnival of The Divine Imagination from Australia

He is best remembered for his electrifying stage acts on Channel 5’s One Moment Of Glory—Singapore’s version of the popular TV series America’s Got Talent—where regional champions and elite performers from different entertainment fields around the world face off against one another. Having emerged a top contender, Danny’s dynamism and credibility has made him one of the most sought after entertainers in Singapore ever since.

Till date, thousands of viewers from across the globe have seen his electrifying acts live on stage.  His list of clients reads like a Who’s Who from the corporate world. He regularly performs for the royalty, international celebrities and their families, as well as countless private parties. Currently the resident magician at the highly acclaimed Going Om Café Danny enchants thousands of people from all over the world weekly with his seemingly endless repertoire of fire and magical performances.

" Danny is the most unique fire artiste I've seen! His strong charisma and stage presence create one of the most dynamic shows ever! A truly inspiring act! "