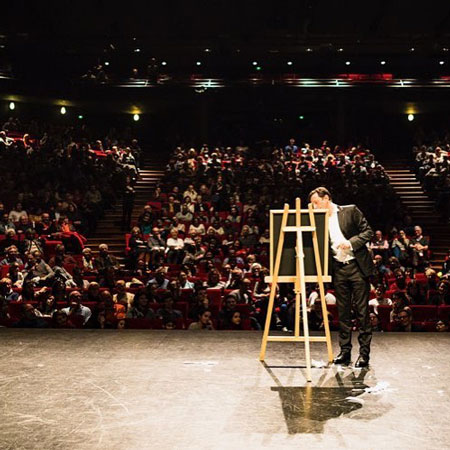 REASONS TO BOOK
Charming mentalist magician with great persona and sense of humour
His incredible mentalist skills have been astonishing audiences for 25 years
Winner of France’s Incroyable Talent and regularly scene on French TV
Clients include Tina Turner, Tour De France, Cannes Film Festival and a Saudi Prince
Based in Paris and available to book for events in France, Europe and all over the world
Magic Stage Show, Close up Magician, Talent and TV Show Personalities, TV Show Talent Acts, Magic and Illusion Show, Magic and Illusion, Cabaret and Stage Shows, Mentalist

A regular fixture on French national TV, our France Mentalist Magician is just at home on a TV set as he is in front of an intimate audience at a private event. With 25 years of experience as a magician he has devised an incredible stage persona and set of skills that makes him a sought after and top magician in France.

Our France Mentalist Magician came into the spotlight by taking part in and winning France’s Incroyable Talent, the first magician to win the competition, with a finale watched by millions of viewers. Since winning the talent show he has been seen on many prime-time TV shows such as Vendredi Tout Est Permis, Le Grand Show, Coup De Coeur and many others.

From stage shows to close-up performances, the France Mentalist Magician’s shows always have a massive impact on the guests. Every event involves participation from multiple audience members making it a magic show they are sure to remember. His wit, mind-reading abilities and creative magic shows are perfect for leaving your guests with a fond memory of the event.

Over the last two decades, he has earned a profound reputation not just as a magician in France but worldwide. He has amazed international audiences, VIPs and celebrities. He has been booked for major sporting events such as the Tour de France, Rolland Garros and Bercy Open Tennis Championships as well as the World Athletic Championship, Metro Racing and The French Football World Cup.

As well as sporting events in France, the magician has provided magic shows for dinner parties, special events, Tina Turner's wedding, the Cannes Film Festival, one of the princes of Saudi Arabia as well as for the Choudhri family and tours worldwide.

Clients searching for a magician in France can contact our team at Scarlett Entertainment. The team will be more than happy to discuss your event and assist you in booking the France Mentalist Magician.