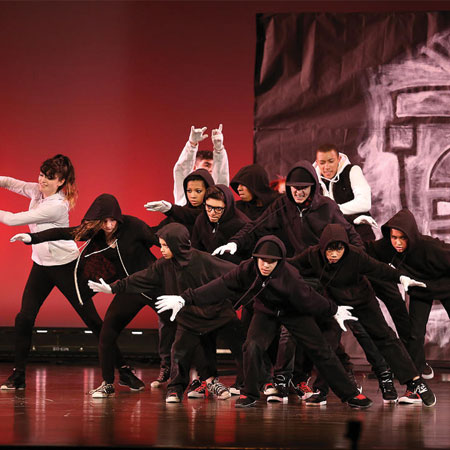 Creating their own dynamic and eye-catching choreography, this Colorado based hip hop dance crew have won the hearts of audiences all over the US. Beginning as a community dance group aiming to offer kids an opportunity to learn new skills and stay off the streets, this amazing urban dance company have reached for the stars and achieved amazing international success.

Expertly performing a range of dance styles including hip hop, mime, krump, step, break dance, tutting, tricks, waving and gliding, Scarlett Entertainment USA's expert team of trained dance artists have been rigorously auditioned to ensure that they are truly the best in the business.

Tutored by world renowned choreographers, the 22 amazing dance performers in our Hip-Hop Street Dance Group will work to ensure that your festival, sports match, half time entertainment, theatre show or corporate event is as awe inspiring as it can be. A versatile performance group, these street dancers can be hired in any lineup, from a duo to a full ensemble and our dancers can create new routines to meet your specific event theme or brief.

Top Tip!
If you are looking for an interactive entertainment experience for your event, why not hire some of our professional dance tutors to teach your guests some street dance or break dance moves?

" Love this group!! Instructors are amazing, the music great, and the message the best!! Keep up the fantastic work! "

" This crew has already touched so many hearts in countless communities, it is their purpose and passion. You can see it on them every single time. They are shinning stars for a purpose beyond measure "